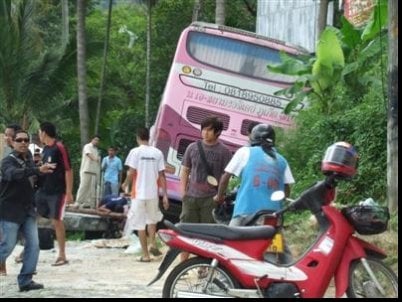 PHUKET: A bus carrying 37 Russian tourists from Phuket International Airport has crashed on Patong Hill, injuring many passengers in the second such incident in four days in Phuket.

A Russian passenger told the Phuket Gazette that the bus – emblazoned with the company name “J-Siam Holiday Phuket Co” – was carrying 37 Russians, and four Thais: two tour guides, one driver and one assistant.

The group had just arrived in Phuket and were en route to the Duangjit Resort in Patong.

There have been no fatalities reported, while the exact number of injured and the extent of their injuries remains unclear.

A Thai woman who was on the bus when it crashed said it seemed as though the brakes failed as the bus descended a dangerous stretch of steep road leading into Patong.

The bus ran off the road and slightly downhill before coming to a stop in what appears to be a construction site.

A Phuket Gazette reporter is on the scene and will be giving updates as more information becomes available.

On Saturday, a bus carrying Chinese tourists overturned on the Chalong-Kata Hill road, killing one and sending 29 to the hospital with injuries.

The accident today took place near the spot where a tour bus went off the road earlier this year, killing one and injuring about 40.