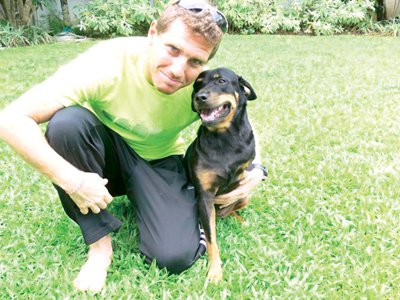 PHUKET: Gazette columnist Russell Distance Russell (the Dog Whisperer) and his close friend DJ Jay “Le Shark” Walker are set to become even closer this December as they intend to spend 24 hours strapped together while walking 100.31 kilometers.

The three legged charity walk aims to raise funds for the Phuket Animal Welfare Society (PAWS) and achieve worldwide fame and fortune along the way by getting into the Guinness Book of World Records.

Mr ‘Distance’ and Mr ‘Walker’ (we’re not making this up) will start by circling the Thanyapura Sports and Leisure Club’s track at 1pm on Saturday, December 10. And from there, they walk the 15 kilometers to the Laguna Phuket “Y-junction” to finish at the Quest Family Fun Day which is being held in honor of PAWS.

The entire walk will be videotaped and two independent witnesses must sign off on the authenticity of the walk and the considerable paperwork required by the Guinness Book of World Records to be eligible for a world record. The current record is 100.3km set by Steven and Suzanne Eltis in Brisbane, Australia in 2008.

Russell and Jay will be able to take breaks along the way but at all times will have their ankles tied together with a specially made, cushioned velcro ankle strap made for the occasion.

Russell, who is also training for this year’s Laguna Phuket Ironman, and Jay are training now twice a week to get the gait and rhythm right. “We’re both getting into the groove now and growing ever more confident of smashing the world record,” said Russell.

“Of course, it’s not just for glory – we’re doing this to raise money and awareness for PAWS,” he added.

If you’d like to sponsor them, go to pawsphuket.com, click donate and fill in the forms. Or give Russell a call on 089-588 4050, or email canineworld@me.com.