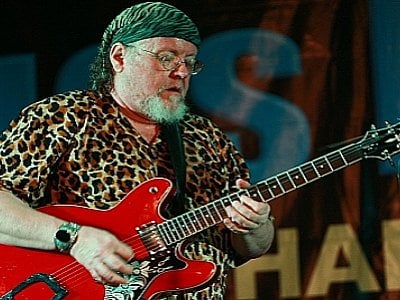 A slightly later than scheduled opening allowed visitors to drift in to the Festival Marquee having not missed the first acts of Australian Jack Derwin and the emotive Moscowfish from Canada.

If it weren’t for a blond guitarist clearly loving every moment on stage, it seemed that Santana was live in Phuket. Thailand’s award-winning tribute band are truly a credit to the Mexican legend and his style of salsa and jazz fusion.

A powerful Swedish contingent exploded with enthusiasm as Sky High hit the stage, and rightly so. The only thing louder than the magnificent music was Clas Yngstrom’s leopard skin suit that will go well with the pink guitar strap presented to him by event organizer Andy Andersen – an awesome combination.

A sprint through raffle prizes was followed by an extraordinary performance from Malaysian group AkashA.Their exciting brand of instrumental rock using modern and traditional Indian instruments had the crowds bounding around in front of the stage.

Not on the program was Stephanie Keys from San Francisco, who literally caused hairs to stand on end with her unaccompanied and compelling rendition of Janis Joplin’s Mercedes Benz and later I need a man, that was expertly challenged in jest by MC Ricky Zen.

Tonight’s lineup promises more exhilarating music with the Stuart Bush Band getting the party going at 6pm. Colin Hill with Jimmy Fame and P Jae Stanley add a Phuket flavor to the stellar mix before the fabulous Grainne Duffy from Ireland and Australia’s John Meyer’s Blues Express get the pulses raised.

The crescendo reaches its peak when headliner Chris Thomas King belts out his blues set, sheduled for 10:45pm.

Anyone with a love for music will love this event. Get to Laguna this evening for an evening that’s guaranteed to impress.

The Phuket Gazette along with 91.5FM and Laguna Phuket are sponsors of the 2012 Phuket International Blues Rock Festival.