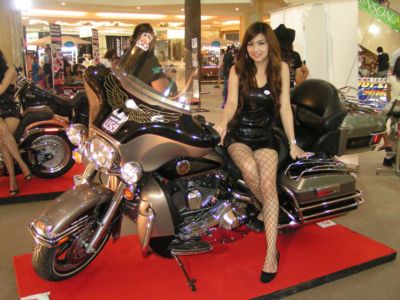 PHUKET: Phuket Bike Week 2008 was kick started last night with an exhibition of gleaming custom choppers and other iron steeds, both old and new, showing their muscle in seven zones at Jungceylon shopping center.

Yamaha, Suzuki and BMW have taken some of the stands to show off their latest superbikes, tourbikes and even jet skis until 11 pm tonight.

Organizers expect more than 1,000 bikers from around the world to have ridden into Phuket for the four-day event, with riders cruising into the city from Malaysia, Indonesia, Singapore, America, Europe, Hong Kong, Japan and Korea.

The noise level will be raised considerably tonight and Saturday night as big bike riders rev it up for the Biker Weekend Party at Loma Park on the Patong beachfront, from 6 pm until midnight on both nights.

Big bikes will be touring the island tomorrow and stopping off at various points to plant trees for what is dubbed the “Island Bike Cruise & Tree Planting for Global Warming” event.

For those who are not into cruising but would rather see some jumping action, check out the KTM motocross stunt show at Patong GoKart at 3 pm, before the riders venture down Bangla Rd.

Tomorrow evening, the bikers will be on their best behavior for a taste of classic Thai cooking for the Phuket Bike Week Grand Dinner 2008 at Thainaan restaurant, opposite Central Festival Phuket, from 5 pm to 10 pm.

On Sunday, bikers will be cooling off opposite the Graceland Hotel on the Patong beach road for wet and wild Songkran fun until midnight.