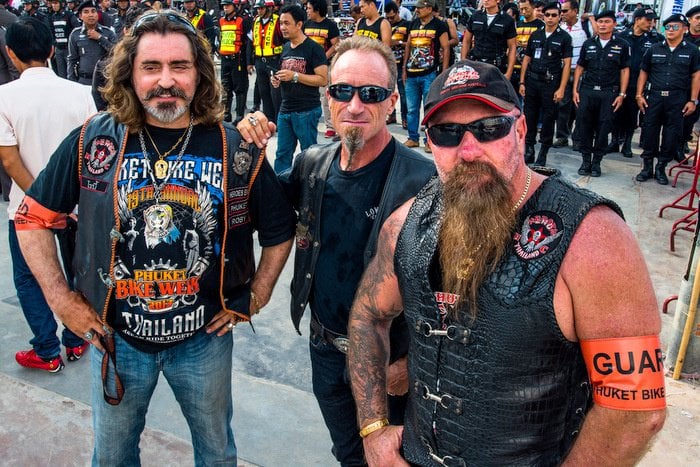 PHUKET: Riders joining the Phuket Bike Week 2015 festivities, which get underway at Loma Park in Patong today have their hearts and their helmets set on doing more than just showing off the best motorbikes in the region.

Among the activities this year is a mass release of sea animals at the Royal Thai Navy base at Cape Panwa to raise awareness of climate change.

There will also be a Ride for Peace, held in conjunction with the local police, to inspire bikers of all walks of life to embrace a non-confrontational lifestyle, and a free helmet giveaway to encourage riders of all forms of motorcycle, including motorbike taxi drivers, to ride with safety in mind.

Bike Week riders will also be taking a day ride out to deliver gifts to underprivileged children and providing support for a day-care facility to look after infants and toddlers of mothers in prison.

The Ride-4-Kids team, with chapters in Phuket and Khao Lak – as well as Khon Kaen, Germany and Austria – on Wednesday delivered a much-needed 1,000kg of rice to the Hands Across the Water Orphanage in Baan Tharn Namchai, near Takuapa in Phang Nga.

Last month, Ride-4-Kids donated eight wheelchairs, 250kg of rice and more than 60,000 baht of consumables, including hundreds of packs of diapers as well as shampoo to the Special Education School Phang Nga in Old Takuapa.

To date, the rolling charity movement has raised more than a million baht for children in need.

Phuket Bike Week, this year held under the banner ‘Asean Ride Together’, is expected to draw more than 50,000 visitors from 30 countries – along with more than 10,000 motorcycles to Phuket.

Phuket Governor Nisit Jansomwong this week praised Bike Week as an event to be cherished.

“It is a good activity through which people can learn more about Phuket, our beaches and Phuket Town,” he told the Phuket Gazette on Wednesday.

“We have bikers from many other countries coming to join the event. We can think of these bikers as our ‘cultural ambassadors’.”

“We expect the 50,000 visitors coming to Bike week to each spend on average about 20,000 baht during their stay here,” she said.

“That means that Bike Week alone is expected to generate about a billion baht for the local economy. This is a much welcome boost for Phuket during the tourism ‘low season’.”

Governor Nisit called on all bikers and visitors to Phuket to have a safe holiday during the Songkran celebrations.

“Above all, ride safely and have a happy Thai New Year,” he said.