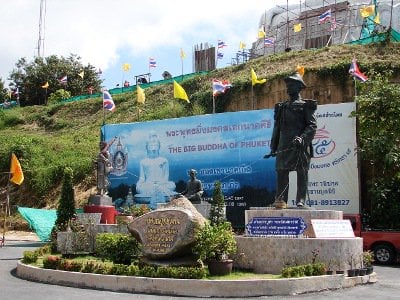 PHUKET: The Big Buddha image in the Nakkerd Hills is scheduled for completion next month, with a nationally-televised prayer ceremony in honor of HM King Bhumibol Adulyadej and HM Queen Sirikit to take place in November, its builders say.

The Mingmongkol Faith 45 Foundation, set up to construct the Big Buddha, made the announcement at a press conference on September 8 at foundation headquarters in Phuket.

Phra Kru Wisut Kittiyaporn, chief of the Kata Ecclesiastical Council, said a prayer ceremony to mark the birthdays of both Their Majesties will be held on November 27.

Letters have already been sent to the abbot who oversees the south of Thailand, asking him to invite monks from across the region to attend, Phra Kru Wisut said.

“Construction of the Big Buddha is almost complete. We have already completed the main Buddha image and are now working on the lotus-shaped base and other decorations. We have to get everything finished before the end of October,” he added.

Suporn Wanitchakul, president of the Mingmongkol Faith 45 Foundation, has extended an invitation to government officers, the media and the public to attend the event.

“I also invited TrueVisions, a leading satellite television operator. They agreed to come and broadcast the event from 9:19am onward,” Mr Suporn said.

“The event will allow people to celebrate Their Majesties birthdays and pay respect to the Big Buddha at the same time,” he added.