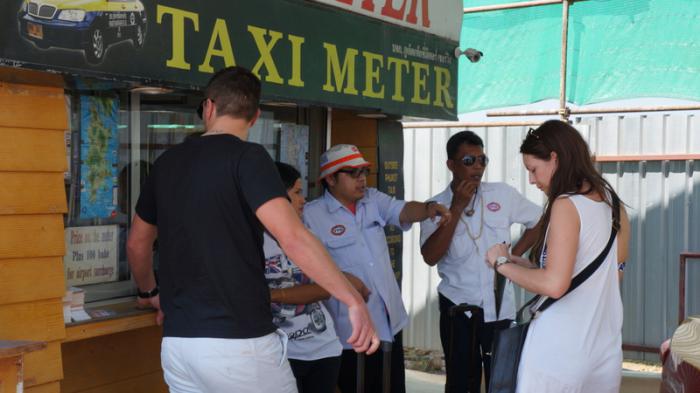 PHUKET: In an effort to compel airport metered taxi drivers to turn on their meters, Vice Governor Chamroen Tipayapongtada will send policemen to pose as tourists in a sting operation.

“If the undercover officers find a taxi driver who refuses to turn on his meter, we will arrest him immediately,” Vice Governor Chamroen said.

The move follows a complaint the Phuket Gazette forwarded to the vice governor on February 14. In it, an Australian expat said that despite his request, the metered taxi driver assigned to him at the airport on February 9 refused to turn on his meter (story here).

“After I received the complaint from the Gazette, I ordered the president of the metered taxi service company to fix the problem by explaining to his staff how metered taxis operate,” he said.

“If they cannot accept that metered taxis have to use their meters, they should not be in the job. The driver in the complaint got a first warning. If he gets another, he will be banned from servicing the airport.”

“This just perpetuates their bad habits,” he said.

“If they insist on charging a fixed price, I recommend taking a green plate [non-metered] taxi instead.”

People who do travel in a metered taxi at a fixed price are urged to present a copy of the fee voucher to the Organized Crime Center in Phuket Town or at Phuket International Airport.

“Even though the Department of Special Investigations [DSI] is not currently in Phuket, I’m still on top of this problem. It’s an important issue for a province that depends so much on tourism. Please rest assured that every complaint you file will get a result,” V/Gov Chamroen said.