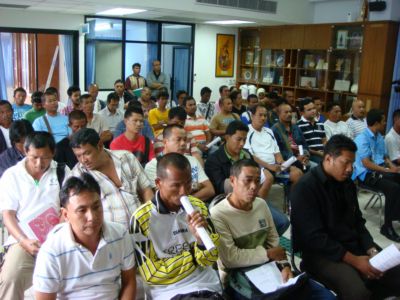 KATHU, PHUKET: Phuket’s jet-ski operators will soon have to insure their craft  for damage, the Phuket governor told a crowd of industry representatives at a crisis meeting at Patong Municipality offices yesterday.

The measure is aimed at ending the island’s infamous ‘jet-ski scam’, in which unsuspecting tourists are made to pay thousands of baht for spurious repairs to the vehicles after they are returned.

The meeting followed the arrest earlier that day of a jet-ski operator for threatening a group of British Royal Navy Marines with a gun during a dispute over ‘damage’ to one of the vehicles. The Marines were on shore leave in Patong.

Footage of Winai ‘JJ’ Naiman, 28, brandishing the BB gun was broadcast on British TV on Monday night as part of a show entitled ‘Big Trouble in Tourist Thailand’.

The show has since been uploaded to youtube.com and has provoked widespread debate among Phuket residents on the Phuket Gazette/Thai Visa forum.

The incident captured on camera took place at the end of June this year, while the HMS Bulwark was docked in Phuket.

After a 21-year-old marine is accused of damaging a jet-ski, a heated argument breaks out between a group of marines and Thai jet-ski operators.

Mr Winai demands 44,000 baht for damage which the young marine claims he was not responsible for.

At one point Mr Winai grabs an air rifle and brandishes it at the marines, who appear visibly frightened and apologize profusely.

Tim, a Royal Navy Marine Police officer, enters the argument, demanding, “How come every time one of my guys hires your jet-skis there’s something wrong with it? He didn’t hit anything, nothing has happened.”

After examining the damage, Tim adds, “That’s old damage, that’s not new damage; I can tell by the staining, I know fiber glass.”

“I don’t worry if you are their boss or you are a captain. This is my business; you’re not my Dad,” he tells Tim in a statement of a type not unusual for jet-ski operators in Patong.

Tim then calls Mr Winai a crook and tells the marines to get back on the minibus.

On Mr Winai’s instructions, his workers surround the marines to prevent them from boarding the minibus.

The marines are only allowed to leave after Tim offers to pay Mr Winai 35,000 baht.

In the afternoon, Gov Wichai moved on to Patong Municipality office where many of the island’s jet-ski operators had assembled for a meeting aimed at ending incidents like the one depicted in the British documentary.

The governor opened the meeting on a tough note.

“In my hand right now are written complaints from Japanese, Chinese, Australian and even Thai tourists, claiming that jet-ski operators in Phuket have cheated them,” he said.

He told the operators they would have to get insurance for their vehicles as it was the best way to put an end to any disputes.

However, some of the operators in attendance said their businesses would not be economic if they had to get insurance.

Tewan “Jom” Promyoung said, “We only have four months to make money on jet-skis during high season, which doesn’t amount to much. If we have to pay 40-50,000 baht a year for insurance, where is our profit then?”

There were additional costs when damage was done to the vehicles, he added.

“How can we be sure the insurance agents will come to the scene as fast as possible? If they’re not quick, we’ll lose money doing the maintenance ourselves,” he said.

Suwimon Saelim, director of the Phuket Provincial Insurance Office, said, “We have never had insurance for jet-skis in Phuket before. We’ll need to have more discussion about this, and we’ll need to find a company willing to insure jet-skis.”

A meeting to hammer out details of such an insurance scheme would take place on September 18 she said.

Look for an extended report on Phuket’s jet-skis in next week’s Phuket Gazette, available on the newsstands from September 19.

Phuket Airport to get Asean upgrade