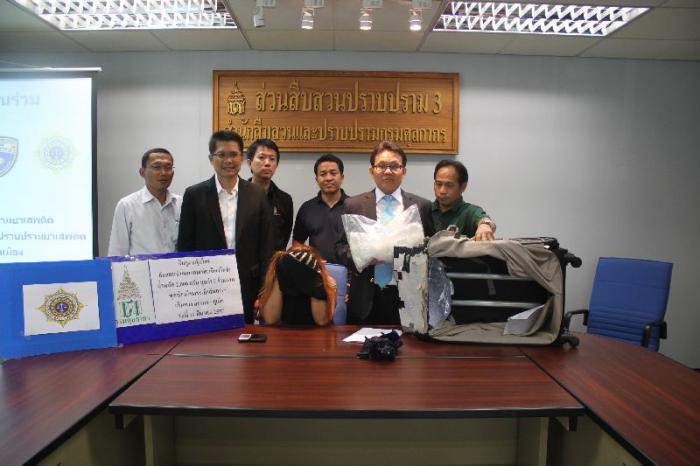 The 37-year-old woman, Pornphat Wattanachaisen, was on a watchlist for possible involvement in drug smuggling when she departed Bangkok to China, said Phuket Airport Customs Director Montira Cherdchoo.

“We learned that Ms Pornphat left Hong Kong on Tuesday via AirAsia Flight 2965. When she arrived to Phuket at about 11:30pm we presented ourselves as Customs officers and searched her luggage,” said Ms Montira.

“We found two kilograms what appeared to be ya ice hidden in her bag. After testing the substance to verify we were correct, charged her for possession and trafficking of a Category 1 drug with intent to sell.”

Ms Pornphat told officers that she was hired by a friend and her Nigerian husband to pick up the bag in Guangzhou, China, and transfer it to a person in Phuket, explained Ms Montira.

“Ms Pornphat has been handed over to the Narcotics Suppression Bureau for further investigation,” she added.

Since late last year, five suspects have been arrested for attempting to smuggle drugs through Phuket Airport, including Ms Pornphat.

In November, Customers officers arrested a 37-year-old Indian woman, Aizawl Lalchhuanthangi, for attempting to smuggle 4.5kg of ya ice into Phuket from Delhi, India (story here).

A Vietnamese man dressed as a monk, 64-year-old Nguyen Van Thiet, was apprehended in January with more than 2kg of ya ice as he arrived on an early flight into Phuket. The drugs had an estimated street value of about 8 million baht (story here).

Then, on March 1, officers arrested a woman who took the afternoon Silk Air Flight MI754 from Singapore headed for Phuket with 5,800 grams of ya ice, said Ms Montira.

“We continue to strictly screen Phuket visitors and keep an eye out for suspicious looking people,” she said.