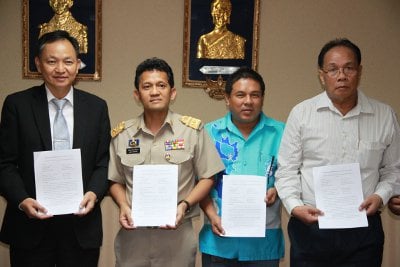 Under a memorandum of understanding (MoU) signed by all main parties involved (see below), the Phuket Mai Khao Company and the Phuket Car Service (PCS) Co-operative will each take into their fold 25 vehicles and drivers from the Mook Andaman (“Andaman Pearl”) taxi driver co-operative.

Mook Andaman currently – and openly – provides taxi services at the airport despite not having a signed concession with AOT to do so.

Its fleet of 136 vehicles maintains a taxi rank on the street in front of the airport, which serves passengers exiting the terminal when there are not enough Phuket Mai Khao or PCS vehicles to cater to demand.

Also approved was the request filed in June by the Phuket Taxi Meter (PTM) Service Co Ltd to have 30 more taxis join its airport fleet. PTM currently has 80 metered taxis serving the airport.

Phuket Mai Khao will add 40 cars to its fleet, while PCS will have 65 vehicles (35 metered taxis, 25 limousines and five vans) added to its ranks.

All “new” taxis will begin legally providing taxi services from the airport after they have been registered as commercial passenger vehicles by the Phuket Land Transportation Office (PLTO).

That process is expected to be complete by January, the Phuket Gazette was told.

Also as part of the agreement, metered taxi drivers will no longer levy a “surcharge” for picking up passengers at the airport.

They must now charge 100 baht for the first kilometer.

Under the terms of the agreement, any taxi drivers who refuse to serve passengers, or who do not use the meter to determine fares, would be subject to immediate police action.

The MoU also clearly stipulates that any future increases in the number of taxis serving the airport, and any increases in the fares charged by taxi operators, must be approved by the PLTO Committee.

In turn, representatives of the taxi operators who are party to the MoU promised “not to damage Phuket’s tourism image”.

Any drivers found to have breached the terms of the agreement face possible action by the PLTO, including cancellation of the vehicle’s commercial registration.

Phuket Airport apparently reserves the right to withdraw from the agreement without any recourse for taxi drivers if the MoU is not upheld.

However, the MoU signed yesterday stipulated that the agreement would remain in effect only until the AOT policy research project announced by Wing Cdr Pratheep had been completed.

Tourists rushed to Phuket after ‘near drowning’ during snorkelling day trip

Brit Aldhouse to be extradited to Phuket