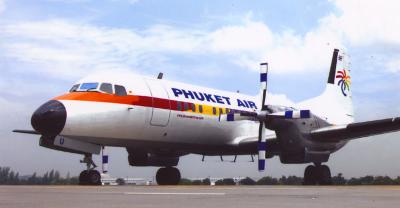 PHUKET TOWN: Phuket Air will not be joining the cheap-tickets war sparked by the launch of Air Asia, its Chief Executive Officer said today. Group Capt Patana Tareekes was speaking at Phuket International Airport, where the inaugural flight of Phuket Air’s new five-times-weekly service, linking Haad Yai with Ranong via Phuket, landed at 10:30 this morning. “We are not going to join this fight in the sky. Instead, we are ready to join alliances of airlines. “Phuket Air does not have cheap flights such as Air Asia’s 99-baht seats, but we are not expensive and we offer the convenience and flexibility that I believe is most important to travelers. “We will not compete by lowering our prices but by offering a high level of service,” he said. Speaking of the new route, he explained, “The idea is to open a new market in lower southern Thailand by linking it to the upper southern region and to central Thailand. “The route inaugurated today means that travelers [from the South] can fly on to central Thailand,” he added. Phuket Air already has a daily service between Ranong and Bangkok. Thai Airways International (THAI) currently flies the same Haad Yai-Phuket-Ranong route, but has announced that it will drop it in the coming few weeks. Despite this, Gp Capt Patana said that he expected the route to be profitable. “The aircraft we use on this route is the 64-seat YS 11/A [a turboprop airplane made in Japan], which we use for short-haul flights,” he noted. The service leaves Haad Yai on Mondays, Wednesdays, Fridays, Saturdays and Sundays at 9 am, arriving in Phuket at 10:30 am. It takes off from Phuket half an hour later and lands at Ranong at 12:20. The return flight leaves Ranong at 3 pm on the same day, taking off from Phuket at 5 pm and landing in Haad Yai at 6:30 pm. For more information call a travel agency or contact Phuket Air at the following numbers: Bangkok head office Tel: 02-679-8999, Haad Yai Tel: 074-422700, Phuket Tel: 076-220665 and Ranong Tel: 077-824591.

Out with foreign touts

No bird ‘flu on Phuket – official