PATONG: Phuket Immigration officers rounded up 24 foreigners over the weekend and charged them with illegal entry into Thailand and working without permits. They are now being held in a Phuket Immigration Police cell awaiting deportation. The operation was aimed at enforcing Article 38 of the Immigration Act of 1979, which has long been ignored by many guesthouse owners. Under Article 38, hotels and guesthouses must update immigration officers daily about their foreign guests. Pol Capt Chatchai Hayimana, Deputy Inspector of Phuket Provincial Immigration Office, told the Gazette today, “There were 24 arrests altogether – 21 Burmese and three Vietnamese. Most of them were men working as touts for local tailor shops. We will deport them as soon as possible.” “We are now following orders from the central government to strictly enforce labor laws and rid the country of illegal foreign laborers and the problems they create,” Capt Chatchai explained. Touts working for the numerous tailor shops in Patong are a common cause for complaint among foreign tourists in the town. Often men from South Asian countries, they are usually employed by local tailor shop owners for their presentable style of dress and their superior English language skills, but the nature of their work makes it hard for them to avoid detection if the government orders a crackdown. Three Thais allegedly harboring illegal aliens also got slaps on the wrist during the raids. “We fined three Thai guesthouse operators 800 baht each for not notifying Immigration of the arrival of foreign guests within 24 hours,” he said. Capt Chatchai identified the three as Suwanna Sae-Lim, 30, of Jaranya Guesthouse; Charnchai Warathiwattanapong, 29, of JJ Mansion; and Amnuay Wannark, 42, of Sawasdee Guesthouse. Similar action was reported earlier this month in Bangkok’s Khao San Road, and it appears that the government is selectively enforcing the reporting requirement in an effort to cut the number of illegal foreign workers in the country. 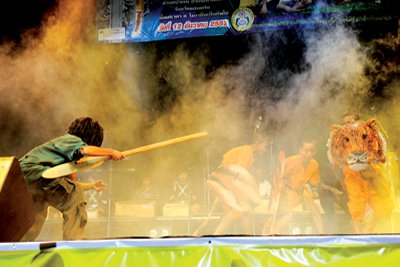