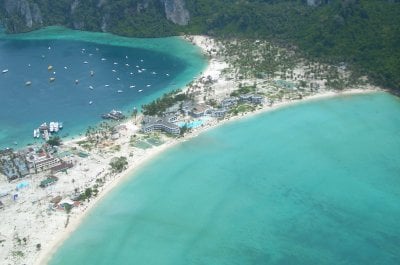 PHI PHI ISLANDS: The government has finally allowed construction of tsunami relief homes on Koh Phi Phi Don, along with temporary structures so that locals may conduct business.

Phankam Kitithorakul, Chairman of the Ao Nang Tambon Administration Organization (OrBorTor), the local authority responsible for the Phi Phi Islands, told the Gazette, “[It is] lucky for us that I had the chance to meet with Deputy Prime Minister Suwat Liptapanlop before the [tsunami] memorial service at Phi Phi.

“I told him about the government ban on any construction and the problems it has caused for people here. He understood, and immediately gave permission for charities to build homes for tsunami victims, and for local people – with the correct paperwork – to erect temporary buildings [for business],” K. Phankam said.

He added that, on January 27, officers from the Organization for Specific Areas Administration for Sustainable Tourism Promotion (OSAASTP) will finally meet with local people on Koh Phi Phi Don to sound out public opinion on development plans that will shape the island’s future in tourism.

The meeting is crucial to the island’s recovery from the tsunami – all construction, including renovation work, was banned in the middle of 2005, pending approval by Cabinet of the OSAASTP’s development plans.

K. Phankam said that the OSAASTP should be prepared for criticism of its proposal that Phi Phi be developed to target high-end tourists only.

“We don’t want to see Phi Phi being designated a special area [for high-end tourists only], but if they want to change us to a Special Administration, just like Bangkok or Pattaya, then we’d be happy to be that,” K. Phankam said.

He argued, however, that Ao Nang OrBorTor is perfectly capable of regulating the islands competently. “In fact, the OrBorTor has managed the islands for a long time. [The government should] just give the OrBorTor the authority to manage [Phi Phi], and not persecute us by not approving budgets.

“Phi Phi could generate a lot of income for Thailand from tourism, and there’s no need to cater to high-end tourists only, because I worry that high-end tourism will benefit just one group of people.”

It has been rumored that the OSAASTP will propose that islanders move to homes in the hills for their own safety should another tsunami strike the island.

K. Phankam stoutly opposes this idea. “All we need is a good warning system, then everyone would survive [in the case of another tsunami],” he said.

He said that two tsunami warning towers are already installed on Phi Phi Don, but the alarm cannot be heard all over the island. “It would be best if the government installed about five more towers,” he concluded.