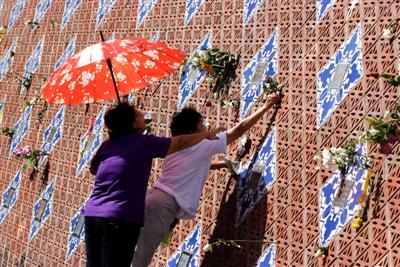 PHUKET CITY: It was a somber time in Phang Nga on Saturday, when residents gathered to take part in ceremonies remembering those who died in the 2004 tsunami disaster that shocked the world five years ago.

Early in the morning, 1,000 Buddhist monks took part in a mass alms giving ceremony in front of the Takuapa Police Station.

At the Tsunami Memorial in Baan Nam Khem, teachers from Wat Bang Muang School put flowers on the wall of remembrance to mark the passing of 51 students who perished in the disaster.

After nightfall, Thais and foreigners in Kuk Kak released 2552 floating lanterns into the sky, one for each known victim from that tambon.

Similar events were held here in Phuket and around the Indian Ocean region, where the tsunami claimed 186,983 confirmed dead and 42,883 missing, according to the UN.