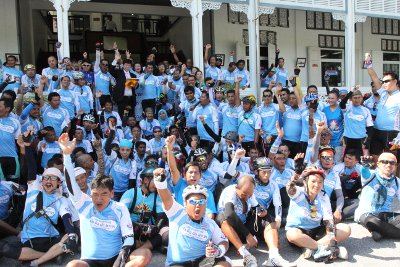 PHUKET: A sortie of 130 cyclists from Narathiwat arrived in Phuket this afternoon, pedaling their way from the troubled province in Thailand’s Deep South to Phuket Provincial Hall in just three days.

The cyclists began their journey at Krom Luang Naradhiwas Rajanagarindra Park on Tuesday and pedaled to Songkhla, Nakhon Sri Thammarat, Surat Thani, Krabi, Phang Nga and then on to Phuket, he explained.

En route, the cyclists promoted and sold local products from Narathiwat to raise money for people suffering from epilepsy in the three southern border provinces of Yala, Narathiwat and Pattani.

“The team of cyclists also presented a signed book of well wishes to be handed to Governor Tri Augkaradacha to congratulate Her Majesty on the occasion of 80th birthday,” said Dr Sak.

“On September 3, the book will be sent to Siriraj Hospital in Bangkok, where Her Majesty has been receiving treatment for a slight shortage of blood to the brain since July 22,” he said.

Once in a Blue Moon