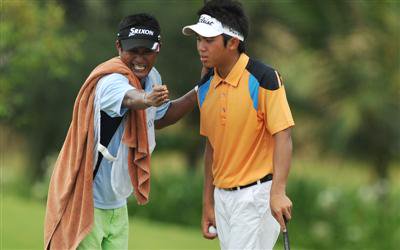 PHUKET: Thailand’s talented crop of young golfers flourished once again yesterday at the US$60,000 Mercedes-Benz Masters Thailand, with new kid on the block Pattaraphol Khanthacha taking the halfway lead.

The 20-year-old from Ratchaburi shot his second successive five-under-par 65 for a tournament total of 10-under-par 130.

He leads by one stroke over Filipino Juvic Pagunsan at Laguna Phuket Golf Club. Pagunsan also carded a 65.

Thailand’s Wisut Artjanawat and Lam Chih Bing from Singapore are two strokes further back after carding rounds of 68.

Thailand’s Udorn Duangdecha, the flamboyantly dressed golfer who won the Singha Pattaya Open, equaled the course record with a 64 and is four behind.

Pattaraphol has been suffering from flu for the past two days, but shook off the illness and fired six birdies and one bogey in only his second event on the Mercedes-Benz Tour.

“I am in perfect shape. I was only trying to make the cut, but I think I can win it now,” said Pattaraphol, who turned professional last July.

“It is a bit surprising though, as I had a really bad practice round,” he added.

Pagunsan, who already has two top-10 finishes on the Mercedes-Benz Tour this year, fired a bogey-free round.

The Filipino could be one to watch over the final two rounds. He is remembered for being named Asian Tour Rookie of the Year in 2006 when he finished seventh on the Order of Merit.

Pinsawat was three under after his first five holes, but could not maintain that pace. He carded five birdies and three bogeys.

Nicknamed “Gress”, short for “progress”, he has his grandfather Prachuab Sabcharoen caddying for him.

“I am okay with two under. I want to improve over the next two days and try to finish in the top 10. My grandfather has been a big help,” said Pinsawat.

Thailand’s Namchok Tantipokhakul, the reigning Mercedes-Benz Tour Order of Merit champion, carded a 69 and is also five back from Pattaraphol.

His compatriot Thanyakon Khrongpha, winner of the Kariza Indonesia Championship, and Singaporean Mardan Mamat are a stroke further back.

Filipino Jay Bayron, the current leader of the Mercedes-Benz Tour Order of Merit, bounced back with a 67 and is two under for the tournament.

The Phuket Gazette and PGTV are the media sponsors for the tournament.

US consular visit to Phuket