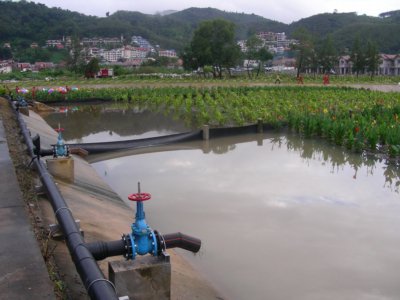 PATONG: The drive to keep Patong Bay free of seaweed in the upcoming high season took a big step forward with the opening of a new wastewater treatment plant on October 12.

The center, built by the Ministry of Natural Resources and Environment’s Wastewater Management Authority (WMA), with 13 million baht from the Danish International Development Assistance (Danida) fund, uses a constructed wetland to filter wastewater before it flows into the sea.

WMA Director Sarawut Srisakuna explained, “After the tsunami we received a message from the Danish ambassador saying that he wanted to help us improve our wastewater treatment capability by using “subsurface wetland” technology developed in Denmark.

The WMA saw the opportunity to use land next to the existing sewage treatment plant to build a second treatment system in the hope of preventing the seaweed plague at Patong Beach during the past few high seasons, he said.

“Seventy percent of Patong’s wastewater can be treated by the old system, but the other 30% comes from Klong Pakbang and Klong Paklak. This water contains a high concentration of organic wastes and chemical substances, such as detergents and shampoo. These are nutrients the seaweed feeds on during the high season. Using the new plant we can treat much more of this water, which otherwise would flow into the bay untreated,” he said.

Moderately polluted rivers typically have a BOD range between 2 mg/l and 8 mg/l. Sewage is considered treated if it can be reduced to a BOD of 20 mg/l. Since this water flows directly into Patong Bay, the goal has been set at zero.

“This system is built to absorb phosphorus and nitrogen, which spur seaweed to grow in the bay. Small amounts of other chemicals might make it through, but it won’t be dangerous for people,” Chairat said.

Sarawut said, “The system will pump water from Pakbang and Paklak canals back to the station for treatment before it is released to the sea. The pumping system automatically turns off during high tide, when the seawater reaches the canal. It reactivates when the water level recedes.

“This system can treat about 1,000 to 1,200 cubic meters of waste a day, about 200 cubic meters an hour. We will set it based on the tide schedule to avoid taking in saltwater” he said.

While the system will have pumps, it will rely primarily on natural filtration, much like the one rainwater goes through before percolating into wells. It passes through increasingly small sediment layers before reaching the sea.

Danida offered its assistance to Thailand after the tsunami because of the large number of Danish citizens who visit and live in the country, but who were barred from donating money by the Thaksin government. Instead, they began devising ways they could assist in creating public works projects such as the water treatment center, he added.

“We received 13 million baht in support for the project from Denmark, which is also supplying an annual management budget of 500,000 baht for three years, a total of 1.5 million baht. During that time they will train Patong Municipality to take over system operations,” he said.

Danida has funded a similar system in Phang Nga, at a cost of 4 million baht, and is providing 28 million baht for a third system now under construction in the Phi Phi Islands.

“It is much more expensive [on Phi Phi] because we will have to ferry all the construction equipment to the island,” he said.

The project in Phang Nga has reduced BOD levels to less than 5 mg/l after three months.