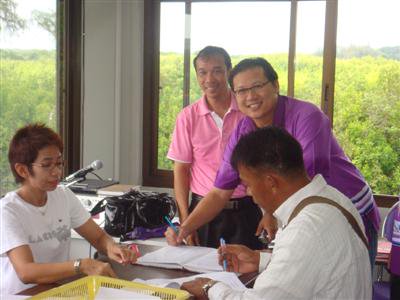 PATONG: Yes, the headline is correct. In hopes of boosting the image of public transport in Patong, the newly-launched Patong Taxi Federation (PTF) saw its first 80 members complete a driver’s training course on May 8 at the Phuket Land Transport Office.

Preechavude Keesin, president of the PTF and son of Patong Mayor Pian Keesin, oversaw the training, which consisted of sessions on driving and traffic law, along with physical check-ups and background checks to ensure members meet the Federation’s standards.

The PTF, established in February this year, now has over 1,000 members from six groups and represents around 70% of all taxis, tuk-tuks, motorcycle taxis and automobile rental companies in Patong.

The goal of the PTF is to coordinate roles among transportation providers, establish uniform rules and clean up the negative image held by many tourists of Patong transport, Mr Preechavude said.

“Before, these companies did not work together, but from now on we will cooperate instead of fighting with each other and make sure everything is fair and that no-one takes advantage of tourists,” he said.

“We plan to fix standard prices and post them so there is no question as to the cost of our services. Before it was up to the individual driver to negotiate fares,” said Mr Preechavude.

The PTF is also working with police to combat crime.

“If there is a crime committed, members of the PTF are a good source of information for the police, as we work in this area and know it well. For example, we can be on the lookout for suspicious vehicles or people,” he said.

His first plan of action as president of the federation is to coordinate with the police, tourists and automobile rental companies to clearly delineate which areas along the beach road are for rental companies and which are for public parking, he said.