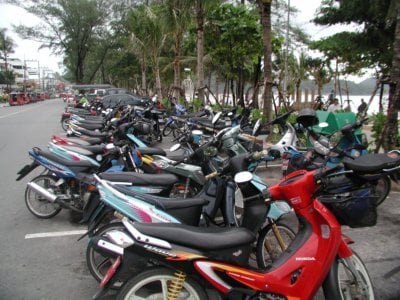 PATONG: New parking zones will go into effect in Patong on January 15, when a one-way traffic system will begin operating along three major roads in the

All connecting roads will be two way, with two exceptions: Chalermprakiat Rd, which runs next to Phuket Graceland Resort, will be one-way heading toward the beach; as will Prachanukhro Rd at the town’s southern end.

Traffic heading toward the beach along Sainamyen Rd, Soi Saensabai and Soi Namsia will be required to turn left at Rat-U-Thit 200 Pi Rd.

Soi Bangla will also be one-way in the daytime, but will close to all traffic nightly at 6 pm.

The new system will run for three months, after which its effectiveness will be reviewed.

Parking will be permitted along selected roads, as follows:

• Rat-U-Thit 200 Pi Rd, one side of its entire length, the side alternating daily;

• Chalermprakiat Rd, south side, but parking permitted only opposite the Swiss Palm Beach Resort.

The new parking zones were announced yesterday at a press conference at Patong City Hall to remind the public about the change, which is intended to bring some measure of order and safety to Patong’s notoriously chaotic roads.

In a related development, Patong Deputy Mayor Chairat Sukkaban told the Gazette that the municipality had now acquired all the land needed to complete Phang Muang Rd, the new road being built between Nanai Rd and Rat-U-Thit 200 Pi Rd, work on which will be funded under the 2008 budget.