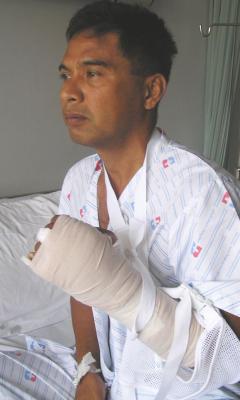 PATONG: Suwat Somnam, a member of the Patong Progress Party, which is currently under investigation by the Phuket Election Commission for vote-buying after it won the February 8 Patong municipal election, was beaten with a metal bar early on Tuesday morning while he was jogging along Patong Beach. “I woke up early as usual and went jogging along Patong Beach,” he told the Gazette. K. Suwat, 47, explained that he was jogging along the footpath near the Baan Lai Mai Beach Resort when a man aged 30-plus and wearing light-pink jeans leaped out from behind a bush and attacked him with a metal bar. “He hit me many times, [and he kept hitting me] until the metal bar was bent,” K. Suwat said. “I raised my hands to protect my head and my face, and then I pushed him backward,” he said. “He backed off, then he ran to a motorbike driver who was waiting for him about 20 meters away.” K. Suwat said that he saw both men drive off, his attacker using one of his feet to cover the license plate, before collapsing on the ground. “I was taken to Patong Hospital by someone on a motorbike and then moved to Bangkok Phuket Hospital later in the day,” he said. “My left arm and my back are bruised. One finger is broken.” K. Suwat also told the Gazette, “I later called other members in the party to warn them to be careful. I think this attack involves local politics because I am a new politician in a new party, and especially because I am a person who usually speaks frankly. “Six or seven people have been attacked because of Patong politics since [Patong] was promoted to a [tessabaan] municipality,” he added. Patong Progress Party leader Songserm Kepsap told the Gazette that he believes that the attack was politically motivated. “K. Suwat is a good person. He has lived in Patong for at least 40 years and has no [personal] conflicts with anyone,” he said. Pol Col Chalit Thintanee, Superintendent of Kathu Police Station, said that police will investigate, with business conflicts and local politics as possible motives for the attack.

Phuket IT to overtake Singapore