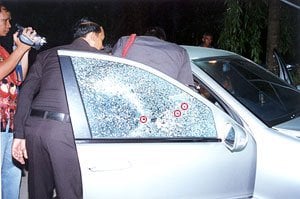 PHUKET TOWN: Patong Mayor Surasak Maneesri last night survived an attempt on his life when a gunman fired three shots through the driver’s side window of his Mercedes Benz as he waited at a red light outside the Tesco-Lotus Supercenter. K. Surasak suffered only light cuts to his arm from flying glass. Speaking at Thung Thong Police Station last night, K. Surasak said that the attack took place at about 8 pm while he was driving home from Tesco-Lotus with his girlfriend, Lalita Haimpat, 23. “I stopped at the traffic lights at the intersection beside Lotus and had just reclined my seat [while waiting for the light to change] when I heard the shots,” he said. He explained that the gunman, who had approached the car from behind, fired into the driver’s side window. The bullets punched three holes in the glass, fragments of which showered him and his girlfriend. “We were very alarmed. It happened very quickly. The gunman ran off into the dark. He was wearing a dark blue helmet and a black jacket. “I didn’t hesitate. I drove straight here [to Thung Thong Police Station] to tell the police,” the Mayor explained. Forensics officers examining K. Surasak’s new Mercedes-Benz C200 found one bullet beneath the passenger-side front seat and said they believe that the other two are lodged in the dashboard. They also believe the gunman used a .38 caliber handgun. K. Surasak said that police had warned him four or five times over the past two months that someone was following him. “But nothing happened,” he said, “so I didn’t bother to protect myself. “I don’t know who tried to shoot me because I’ve never had an enemy or bothered anyone. I think it might be related to local politics because it’s nearly time for [Patong’s] mayoral election,” he added. K. Surasak said that he plans to be more careful in the future, and will be asking for police protection from time to time. Pol Major Gen Kongpol Suwannaraks, Commander of Phuket Provincial Police, also at Thung Thong Police Station last night, said that police have yet to determine the motive for the attack, though local politics or a business conflict have not been ruled out. “After checking the car, I think the gunman may not have been a professional hitman,” Gen Kongpol added.

Villagers save homes from fire