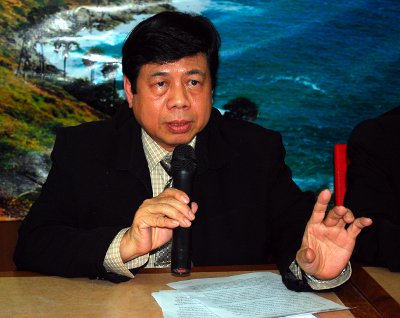 PHUKET: Patong Hospital faces a chronic flooding problem so bad that its administrators plan to construct an emergency dike and pedestrian footbridge to keep out flood water and allow patients to access the facility during periods of heavy rainfall.

Phuket Public Health Office Director Sak Tanchaikul reported on short-term solutions to the hospital’s growing flood problem, which caused a shutdown and partial evacuation of the inpatient ward starting with the heavy rains that hit the province on August 25.

During that deluge, flood waters destroyed important equipment, especially in the hospital’s main power control room, which is located in the basement.

“We will use a 15-million-baht budget to fund this project. When completed, the hospital should still be able to operate even if the surrounding area is flooded,” said Dr Sak.

In the long-term, Patong Hospital hopes to completely reconstruct the power supply control room in a way that would raise important electrical components above the water line.

“However, this is a long-term project and we would need a large budget to fund it,” he added.

Also included in the short-term measures are the construction of a pedestrian footbridge to allow access during periods of flooding and the installation of new pumps to help keep the basement and other low-lying areas dry, he added.

“I believe this project would help the hospital by allowing it to always be prepared to treat patients, both local residents and foreign tourists, even if all of Patong is flooded, he said.

Workers will have to complete the project quickly if they hope to prevent a repeat of the August flooding, as September and October are statistically the rainiest months in Phuket.

Patong Hospital was spared inundation in the 2004 tsunami disaster, but largely unregulated hillside construction in Patong has worsened the flooding situation along the new Phang Muang Sai Kor Road and other nearby areas. In addition, drainage projects successfully put in place to prevent flooding along a stretch of Nanai Road appear to have caused more water to collect in low-lying areas further down the slope.

Flooding coupled with shoddy electrical work also constitutes a serious health hazard in the tourist town, as evidenced by the tragic electrocution of a British tourist on August 25 in front of the Ocean Plaza Patong shopping complex on Soi Bangla.