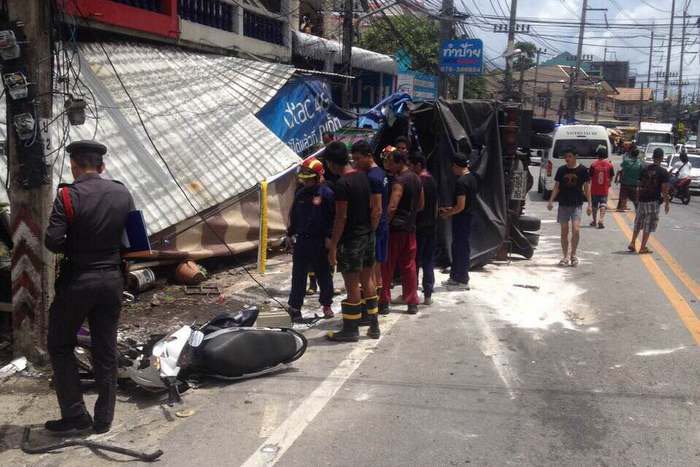 PHUKET: One of the victims in an accident on Patong Hill yesterday has succumbed to her injuries, police confirmed to the Phuket Gazette this morning.

Laksamiduean Sawadiraksa, 26, who was driving a motorbike in front of a six-wheeled truck when it lost control on the hill, sustained serious head injuries in the collision, and was pronounced dead after being rushed to Patong Hospital. Other victims who sustained minor injuries have been discharged from hospital.

Though initial reports said that the truck lost control going up Patong Hill, causing it to roll backward and crash into two women on a motorbike, a full police report today confirmed that the truck was in fact descending the hill.

“Truck driver Kitchan Kitpitak, 50, told police that he was coming down Patong Hill, near the temple, and was unable to brake,” said Lt Col Anukul Nuket of the Patong Police.

“He first hit Ms Laksamiduean on her motorbike, causing her to crash into a power pole, then hit the awning of a coffee shop which collapsed and knocked over six parked motorbikes.

“The truck then slammed into the back of a Honda Civic before flipping onto its side.”