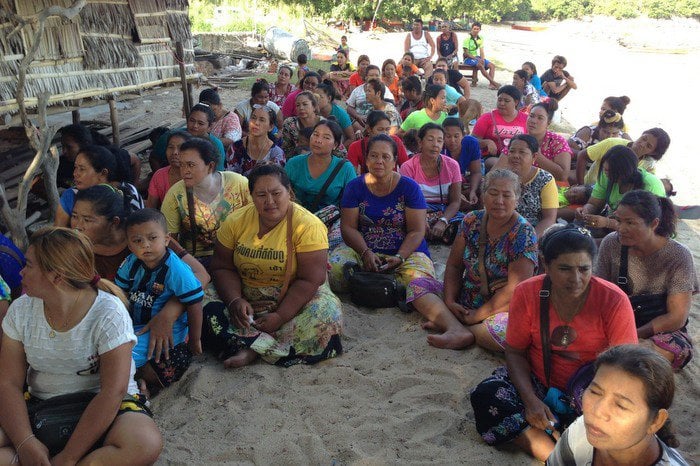 PHUKET: Governor Nisit Jansomwong has requested that naval officers and Chalong Police carry out random checks at the Rawai sea gypsy village to boost security and ensure locals that they will be safe during ongoing land dispute cases.

The security boost follows news reports from June 22 that 200 sea gypsies had begged Phuket authorities for protection after a group of men allegedly threatened to shoot them if they moved concrete blocks that had been placed on the public access road to their village (story here).

Then, on June 26, a group of 40 men demanded that the gypsies demolish their spiritual ceremony hall (story here).

Civil defence volunteers were ordered to watch over the area after the two incidents last month.

“This problem was brought to my attention at the time. However, I was abroad then, so I was unable to personally receive the complaints from the gypsies,” Gov Nisit explained.

“Regardless, everyone living in Thailand has the right to be secure.

“We will not let such threats occur again, and violence is certainly not the answer.”

The Rawai sea gypsies have been fighting for many years to prove their rights to the land their families have been living on for generations.

“Many cases have gone to the courts. There have been about 100 cases since 2008; some we have won, and some we have lost,” Niran Yangpan, a sea gypsy representative, told the Phuket Gazette yesterday.

“I cannot remember the names of the alleged land owners, as there are too many. Recently 50 more complaints have been filed against us by people who claim to own the land.”

Establishing long duration of residency is a key element in the gypsies’ fight against private investors who had won court orders to evict some villagers from the site (Video Report here).

Gov Nisit on Wednesday ensured that the officers would watch over the safety of the villagers, but re-iterated the same thoughts as Mr Chatchawal did last year.

“The land dispute cases between the sea gypsies and the people who claim to own the land are now in the court process,” Gov Nisit noted. “I do not have the authority to intervene in the trials.”

During his visit, the governor also handed out 15 packages containing food and water to the elderly in the community.