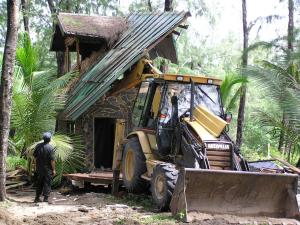 THALANG: Some 200 heavily-armed police and officers of Sirinath National Park today tore down 14 buildings constructed illegally in the Pason Layan area of the park, including one abandoned holiday home. Satien Chuaynu, Chief of National Parks, Region 19, who is based in Nakhon Sri Thammarat and has responsibility for Nakhon Sri Thammarat, Krabi, Phang Nga and Phuket, told the Gazette that his department has plans to turn the area into a new tourist attraction. “In 16 cases of encroachment by people who had built houses, we gave the encroachers 45 days notice in July to vacate and remove the buildings, but two families have still not moved out,” K. Satien said. “We will discuss the problem with them first and if that doesn’t work, we will have to enforce the law and remove them. However, after a meeting yesterday with the local representative, we plan to find them somewhere to relocate to temporarily, to help them,” he added. Most of the small houses demolished today by wrecking crews and a backhoe appeared to have been empty for a while, though some had clearly been vacated only recently. The demolition was watched by the inhabitants of the two remaining houses, who stood their ground. One of them shouted to the officers, “We are not influential people. We are just poor people who don’t have anywhere to live – that’s why we have to live here. “If Thais who are very poor cannot live on land belonging to the Thai people, where can they live?” he called out.