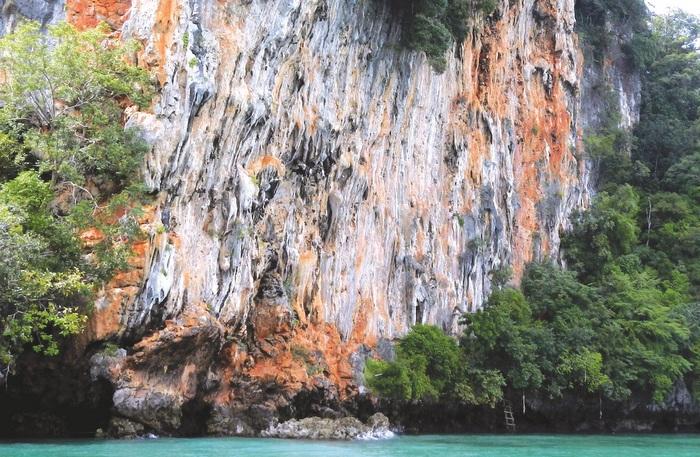 PHUKET: A new national park chief has banned rock climbing on a number of internationally popular limestone outcroppings in areas under his jurisdiction, ruling the sites as unsafe.

“Climbing is an extreme sport and a risky activity. Even though there are safety regulations, and well-tested equipment is being used, there is still the possibility of someone falling and dying,” said Worapot Lomlim, the Ao Phang Na National Park chief. “There is no need for an expert’s opinion on this; I can see myself that it is not safe.”

“In the last decade, Thailand has been able to position itself as an exotic climbing destination that is able to offer a nice combination of sea and rock experiences,” explained Riccardo Mereu, a certified Climbing Wall Instructor (CWI) and the blogger behind the popular PhuketClimbing.Blogspot.com. “Rock climbing is very popular in Railay, Tonsai and Chong Plee here in the south, while the north is dominated by the Crazy Horse Crag in Chiang Mai.”

“Hanging out over the Andaman Sea climbing a beautiful limestone roof. Paradise living here!” Ms DiGuilian recently posted on an Instagram photo of her deepwater soloing, that is, climbing over deep water without ropes, in Railey.

The major safety concerns in rock climbing can be broken down into three different categories: loose rocks, human error and unsafe protection – such as steel bolts placed into the wall that have since corroded, explained Heather Miner of The Mountain Shop Adventures.

Despite Mr Worapot’s concerns about the safety of climbing in Koh Yao Noi, Ms Miner assured the Phuket Gazette that the walls are incredibly safe.

The use of titanium bolts, which can rake up a bill of between 5,500-8,000 baht per route, is essential in Thailand. Over the last few years, stainless steel bolts on routes in the Kingdom have been swapped out with titanium bolts and new routes put up throughout Thailand are being done so with titanium bolts.

“Stainless steel bolts are commonly used throughout the world in climbing areas. These bolts have been proven to break in environments such as Thailand. Titanium bolts are the solution to this problem,” Ms Miner explained.

In 2012, there were about 100 bolted routes on Koh Yao Noi, with more routes having gone up since then.

The costs of bolting the routes is mostly footed by a small group of dedicated rock climbers, reported Climbing, a US-based magazine, in 2012.

“Koh Yao Noi has been entirely equipped using titanium bolts and red-glue, which at the moment are the top material in terms of safety standards. This outstanding job was started in 2004, a few days before the tsunami, by Marc Miner [Ms Miner’s husband] and his friends,” explained Mr Mereu.

A number of the bolts used in Koh Yao Noi were donated by the Thaitanium Project, which accepts cash donations from climbers around the world, and then passes those donations to the climbers placing the orders for bolts each year.

“Considering that most of the climbing areas are frequented by local climbers, hence constantly inspected, all the routes are very safe and there is very little room for danger,” Mr Mereu explained. “In any case, we need to remember that we are talking about rock climbing, which is itself an activity that exposes its lovers to a higher dose of risk than badminton, for instance.”

Unlike Railey, the climbing in Koh Yao Noi is still a relatively ‘small business’. Nonetheless, it provides an important source of income for local communities on the island.

“Rock climbing is a large part of the economy of Tha Khao [one of the villages on Koh Yao Noi], as well as the island in general. Bungalows, restaurants, massage shops, local boatmen and so on, are all losing business because of the closure,” explained Ms Miner. “Tha Khao is the closest village to the climbing routes, and it is where boats to the climbing areas depart from, so this is the village that is being most affected.”

Though rock climbers are not known for being five-star hotel guests, the money they spend is mostly directly injected into local communities instead of feeding the profits of large travel organizations, explained Mr Mereu, who works for a large travel company in Phuket.

“Closing Koh Yao Noi simply means deliberately obstructing the growth and the respectability of Thailand as a world-class climbing destination, and most importantly, depriving the local community of an additional income that would otherwise be entirely lost.”

However, Mr Worapot said that the closure of the routes will not have any major impact on tourism or local businesses on the island.

“Only a small number of the tourists who come to Koh Yao Noi do so for climbing. The safety and lives of those visiting our park is much more important than the small amount of income that can be derived by allowing the activity. I hope that people will understand this and enjoy other activities offered on our island,” Mr Worapot said.

Climbing in national parks is not illegal, confirmed Mr Worapot. However, it is necessary to file certain paperwork, and permission must be granted by the park chief.

“Normally, climbing can be done in a park if the operators get permission from officers. All they have to do is send a letter requesting permission to conduct this kind of business in the area,” Mr Worapot said.

“In this case, it doesn’t matter if they do apply to designate the area as a climbing zone, as I have already decided to ban this activity. The walls are too steep, it is too dangerous.

“Please do not compare us to other places, as every officer has their own way of making decisions, and I say ‘no’ to this.”

Mr Worapot explained that he was taking a hard line on the issue following operators disobeying orders banning climbing.

“We have warned them a number of times, but the businesses keep getting bigger and bigger. I must be firm.”

Mr Worapot has posted signs informing operators and tourists that climbing in the area is illegal. However, he pointed out that tourists weren’t his primary focus.

“Operators know that they are not supposed to climb, but still do. Tourists will not climb without operators to lead them,” he said. “So, we will not press charges against tourists or fine them.”