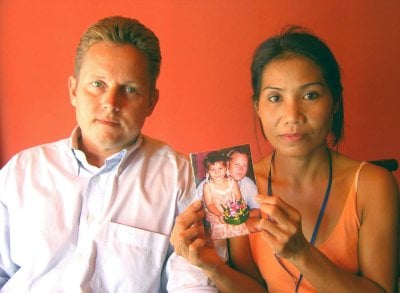 PHUKET: Sascha and Patchara “Riem” Meissmer have new hope of being reunited with their five-year-old daughter, Solitaire, who was presumed lost in the tsunami in Phang Nga nearly a year ago.

Since friends in Germany alerted them last week to an Internet photo showing a young, Eurasian-looking girl they thought resembled Solitaire, the Meissmers have been trying to determine the identity of the girl in the picture.

“I can’t get the photo out of my mind,” Mr Meissmer said. “We cannot stop looking for Solitaire now. If we did, one day I might look at her photo and ask myself, ‘Why didn’t I look deeper into this?'”

The picture on the www.phuketremembers.com website (see here)appears to have been taken on December 27, 2004 in a Phuket Provincial Administration Organization (OrBorJor) office, and includes medical staff of a nearby hospital, he said.

Mr Meissmer, who has lived in Thailand for eight years, told the Gazette today that he and his wife are to meet with Governor Udomsak Uswarangkura at the Provincial Hall tomorrow morning. They believe the Governor is willing to help them resolve the issue by helping to find out who took the photograph.

The Meissmers received an official Kinship DNA Match Report, signed by three DNA experts, from the Thai Tsunami Victim Identification unit in July this year. The victim’s body was collected by the Meissmers and cremated; a death certificate was issued in August.

However, the Meissmers are now convinced that there could have been a mistake.

“None of Solitaire’s distinctive scars – one on the back of her right heel, one on her forehead and one on her chest – is mentioned in the report,” Mr Meissmer said.

“It just says the physical comparison matches in terms of sex, age, hair color and height. The DNA match is stated as 99.99%. But it was a chaotic time and we have doubts about the scientific process.”

“It is just possible that the girl in that photo is our daughter,” Mr Meissmer added. “We have to do whatever we can to find out. I don’t want to reach age 50 or 60 thinking I could have found my daughter years ago if only I had tried harder.”