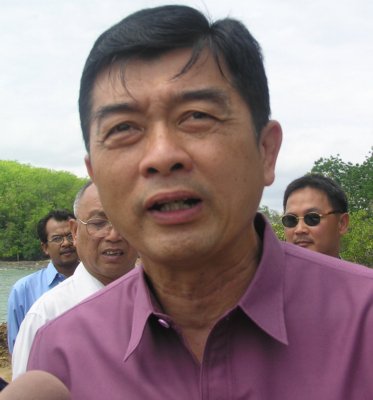 The transfer was announced December 13. Palad Nivit will officially take up his new duties in Samut Sakhon on December 25.

Palad Nivit told the Gazette that he had applied for a transfer from Phuket after a stay of little more than a year because he is very tired of the hard work the job in Phuket entails.

“I’m not moving away from Phuket to avoid the problems here, I’m moving to be closer to my family in Bangkok as don’t want my family to have to relocate here,” he added.

Palad Nivit was in charge of many fractious disputes on the island. He bore responsibility for the ongoing eviction of squatters from Soi Phra Barami 8 in Patong, the eviction of the vendors in front of Laguna on Bang Tao Beach, the investigation into Narin Dangtakote’s orphanage for tsunami victims, and he was heavily involved in the introduction of the currently-stalled new regulations for dive businesses.

“I’m proud that the work I did was understood by the people and the press. I’m particularly proud of the work I did in resolving the [airport] limousine problem, which was a very difficult situation before my involvement,” Palad Nivit said.

“I have transfered my current duties to Vice-Governor Tri Augkaradacha to continue,” he added.

“I would like to thank again the people and the press for helping me and for understanding what I have been trying to achieve here. Although there are some issues that I have not yet brought to a satisfactory conclusion, I have worked very hard to help make Phuket a better place,” he concluded.

K. Nivit’s replacement as Provincial Palad from December 25 will be Piya Pharatasinlapin, who was Muang District Chief in Nakhon Sri Thammarat.