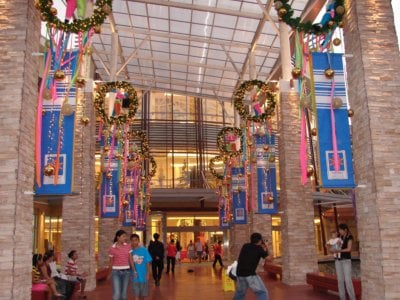 PATONG: The Jungceylon mega-complex officially kicked its doors open last night with the grand opening of That’s Siam, the largest of the shopping zones in the complex.

In addition to the opening ceremony, early-bird shoppers were treated to performances by traditional Thai dancers, street performers, a giant indoor Christmas display and a light and water show.

That’s Siam comprises 10,000 square meters of floor space, of which about 50% is occupied by businesses that are now open for business.

Among the shops now trading are outlets of major chains, including Star Bucks and Carrefour, as well as branches of Siam Commercial Bank and KasikornBank.

Other zones in the complex are slated to open next year.

Prawich Janyasittikul, Vice-CEO of Jungceylon Phuket, said that 90% of floor space in That’s Siam is devoted to shops selling Thai handicrafts, with the remaining 10% being occupied by shops selling imported items such as carpets, cashmere, metalwork and stylish household goods.

The opening of That’s Siam also marks another milestone for the beach resort town – underneath the center is parking space for some 2,000 cars that is now available to shoppers.