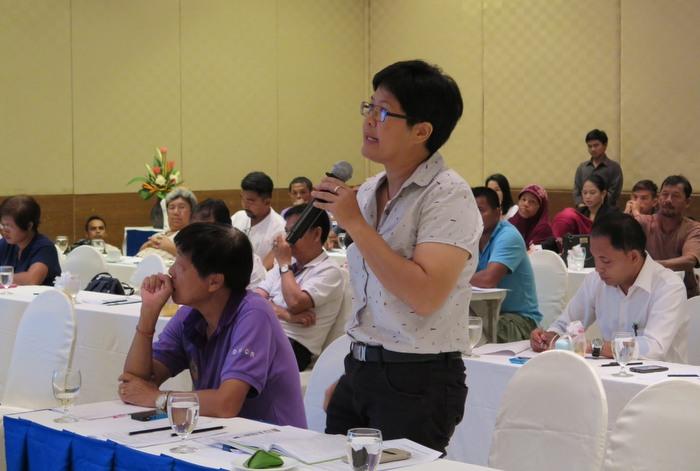 PHUKET: Pak Khlok residents are worried that a new marina to be built in the area will have a negative impact on the environment and their livelihoods.

The Kung Bay Marina is one of four new marinas slated to be built along the Andaman coast as part of a government-supported initiative to develop marine tourism in the region (story here).

Covering 108 rai, it is one of the larger marinas for the area, and is suitable for superyachts as it has a minimum depth of eight meters.

A group of about 50 residents expressed their concerns at a public hearing held on April 5. The meeting was headed by local officials and representatives of the companies assigned to oversee construction and management of the new marina.

Chairing the meeting was Kanok Khemnark, managing director of Enrich Consultants Co Ltd, which is contracted by project owner Seaview Land Co Ltd to conduct research on the environmental impacts of the marina.

Project manager Prapong Saelim was keen to assure the concerned residents about its benefits for the local community.

“The marina will bring revenue to the people of Pak Khlok, much like locations such as Patong, Kata, Karon and Bang Tao,” he said.

Mr Prapong confirmed that the proposed site for the Kung Bay Marina did not encroach on protected mangrove forests, and that most locals surveyed were in agreement with the project.

“We are also concerned about the environmental impacts of the marina, but this will be taken care of with the Environment Impact Assessment (EIA) report,” said Mr Prapong.

Despite the reassurances, locals were still concerned about changes to the landscape.

Speaking on behalf of the locals, Pak Khlok resident Soonthorn Tohtip said many who made their living by fishing in the area were concerned that construction of the marina would negatively impact their livelihoods, if the channel leading to the marina was changed.

“We need to be properly informed and involved in the development process to ensure that the project is beneficial to all concerned,” said Mr Soonthorn.

Mr Kanok promised transparency and reassured residents that more information would be made available by the end of this month.

“This was a preliminary meeting and will be followed by another in August. In the meantime, more studies will be done to assess the impacts on the local community, including an assessment by the Office of Natural Resources and Environmental Policy and Planning (ONEP),” said Mr Kanok.