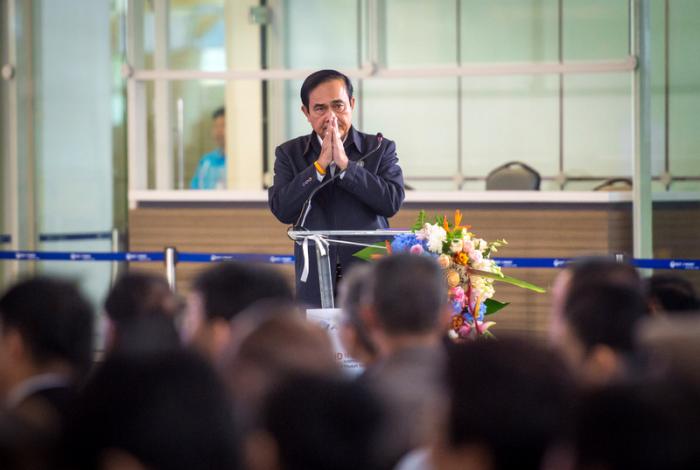 The visit by the head of Thailand’s military government is billed to last only for today, as he headlines the opening ceremonies of the airport’s international terminal, inaugurates ‘Startup Thailand’ and meets with trade representatives at Phuket Rajabhat University.

“I’m pleased to see the new terminal opening, especially after its initial delays,” PM Prayuth said to the congregation this morning. “I want to extend my thanks to the Ministry of Transport, the board of the Airports of Thailand and everyone else who took part in this expansion and made it happen.”

“I am impressed by the terminal,” he added. “Even though it doesn’t look very luxurious, I can see that the terminal is useful, and will be supportive and convenient for passengers. We are focused on supporting the growth of Thailand’s tourism industry, and the 15 million passengers passing through Phuket’s international airport is a good sign.”

Phuket Airport began testing the facilities of the new international terminal with a handful of flights from China last week (story here).

PM Prayuth also took the opportunity to urge Phuket’s authorities to crack down on law breakers.

“The main problems in Phuket are its traffic and the encroachment of private businesses onto public land,” said PM Prayuth.

“Some people complain to me and accuse me of wanting to ruin the tourism industry when we work on land encroachment cases in Phuket. To them I say, we cannot let a group of people take for themselves that which should benefit the entire nation. If we do not reclaim our nature today, then when?”

The Prime Minister also lambasted Phuket’s taxi mafia, encouraging officials to wipe out any such illicit organizations across the Kingdom.

“The next thing to think about is what local people will get from the 15 million tourists who will walk in and out of these doors,” PM Prayuth said.

“We have to think about it as a whole from the very beginning. We cannot think only about big businesses. Farmers must have a place in this and every terminal in Thailand. That is what this government wants to see.”