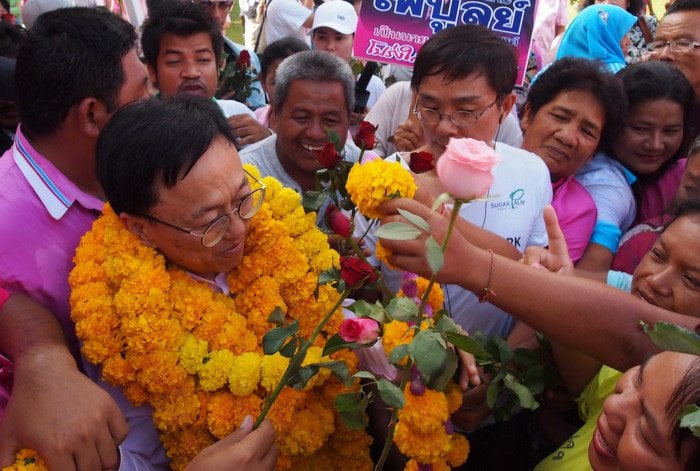 The order signed today names a number of government officials throughout Thailand. Mr Paiboon was the only Phuket official on the list.

“The reason the government has temporarily removed me from my position has to do with an investigation by the Office of the Auditor General of Thailand [OAG] into the OrBorJor [PPAO] Hospital,” Mr Paiboon told the Phuket Gazette today.

“There are special budget procedures concerning the building of the patient rooms at the hospital, which the OAG has said are wrong and need to be further investigated.

“I think our procedures are not wrong. However, the OAG wants to check and ensure everything is okay.”

Mr Paiboon explained to the Gazette that his health had recently been failing him.

“This order will give me a chance to relax and recover,” Mr Paiboon said. “I think after the OAG confirms that there was no illegal activity, I will resume my position, which might be in a few months.

During his time as PPAO President, Mr Paiboon launched the ‘pink public bus’ service, which won a national innovation award, and opened the PPAO hospital in Rassada (story here). His thematic use of pink for OrBorJor programs eventually earned him the nick name ‘Pink Panther’.

Paiboon Upatising was originally elected PPAO President in a landslide victory over former PPAO President Anchalee Vanich Tephabutr, who campaigned under the banner of the Democrat Party in 2008 (story here).

Mr Paiboon was cleared of vote-buying allegations by the Appeals Court in Bangkok on September 8, 2009.

“We will coordinate with local administration organizations to deliver better service to the people. Today we are very proud of the trust the Phuket people have placed in us, especially given the scale of the opposition we were up against,” Mr Paiboon said on April 20, 2008.

Under the control of Khon Baan Rao, the PPAO planned to set up a center to accept requests for action or complaints from all island residents.

“We will rush to solve problems, including those with water supply, traffic and roadworks, education and the teacher shortage,” he said.

“We are planning to put the right people into the right jobs and the council will now have to accept it. People have to change their outlook, because the new PPAO members will be the representatives of people.

“From now on, the OrBorJor [PPAO] president will work for the people, not the other way around,” he assured the public.

Less than a year after being re-elected in 2011, Mr Paiboon resigned from his position as president of the PPAO in a bid to force an early election (story here).