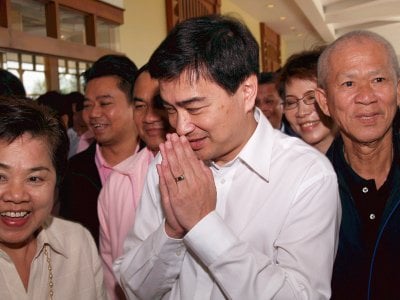 PHUKET: Prime Minister Abhisit Vejjajiva arrived in Phuket yesterday evening ahead of the two-day Democrat Party “Crisis Seminar”, which got underway at the Merlin Beach Resort at Tri Trang Beach this morning.

During his opening address, PM Abhisit reminded party members to “perform our duty with efficiency and in accordance with the law and the principles the spirit of the law upholds, and the facts – and then we can move forward.”

Doing their (party members’) jobs “as well as they can and with loyalty is good not only for the party, but also for the peaceful future and rebuilding of the country,” he said.

He also said that on his way to Phuket he was asked by foreign media whether his intention was to concentrate on diminishing the influence of ousted premier Thaksin Shinawatra.

To this, he said, “That is not what I am focusing on. Right now I am concentrating on and rebuilding a peaceful future for the country.”

The convention, themed “Concentrating Energy to Resolve National Crisis”, is bringing together more than 190 Democrat Party members, including Democrat members of parliament (MPs) and heads of government ministries.

According to a party press release, the purpose of the convention is to train Democrat MPs how to access and empower the “people network” in their areas to support the party’s “peace plan for the nation’s future”.

After the opening session, Deputy Prime Minister Suthep Thaugsuban chaired the “Overcoming Crisis through People Power” session, from 11am to midday.

Although the meeting was held behind closed doors, from outside the chamber sound clips of the recent red shirt protests in Bangkok could be heard, including the voice of red shirt leader Arisman Pongruangrong who remains at large on terrorism charges leveled against him by the authorities.

On the agenda for tomorrow at 9am is a session titled, “The peaceful future of Thailand and Phuket”, which will be open to the public to voice their opinions to the party.

Phuket to stay green up top