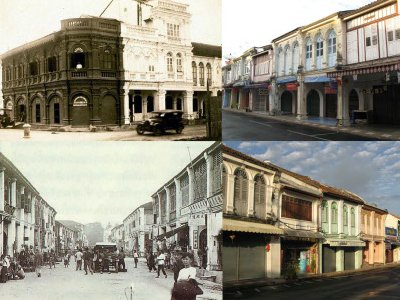 PHUKET: Revitalization of Phuket Town’s Sino-Portuguese heritage was the topic of a seminar held by the Senate Tourism Committee on July 30, led by Phuket Senator Thanyarat Atchariyachai and Phuket City Municipality at the Metropole Hotel.

Speaking at the seminar, Phuket City Mayor Somjai Suwansupapana explained that there were three major plans for the project.

The first is to develop a historical trail as a “living musem” in Old Phuket Town with improved footpaths, signage, and to move cables underground, she said.

The second plan calls for structural improvements of buildings along the historical trail and the environment surrounding them. This phase also calls for the development of Klong Bang Yai canal as a recreation spot in Town and the construction of a multi-purpose public facility in Queen Sirikit Park.

The proposed building on what is now a parking lot will provide a venue for Phuket Town’s multiple festivals, among other things. There will also be a tourist information center in the building to promote the area and educate tourists on its history, such as Thalang Road’s past as a bustling commercial street.

Also to be spruced up are the old Chartered Bank and police station, which will become Peranakan museums.

The third part of the project is to renovate buildings on Thalang Road to showcase their Sino-Portuguese architecture in what will be a prototype for further development in Old Phuket Town.

Sen Thanyarat said, “Phuket is now a world class [tourist] destination with about 5-6 million visitors a year, but only 3% of them visit Phuket Town. The Tourism Committee sees that the Sino-Portuguese culture can be preserved and revitalized, as there are tourists who come here not only to enjoy nature, but for heritage tourism.

“I, as a Phuket resident, have observed the changes in Phuket’s economy. The business center of the island is no longer in Town, but on the beaches, so it’s important to develop Phuket Town to attract tourists.”

Mayor Somjai said, “This project study will support tourism activities in Phuket Town, and it will also contribute to cultural and economic revivals.

“In the long-term, it could also lead to the designation of the area as a World Heritage site, like Malaysia’s Malacca and Georgetown.”

Most of the 150 people attending the seminar supported the plans and the promotion of tourism in Phuket Town. However, the alteration of any buildings must be agreed on by the residents and impact assessments must be conducted before moving forward.