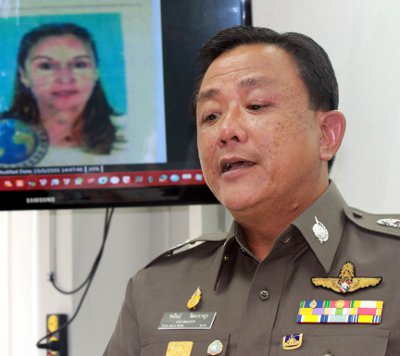 PHUKET: Phuket Provincial Police Commander Chonasit Wattanavrangkul this afternoon confirmed that 173 items have yet to be recovered from the jewelry and gem heist in Phuket yesterday morning, despite police having three foreigners in custody.

The missing valuables are estimated to be worth about 5 million baht, he told a press conference at Phuket City Police Station today.

The third foreigner arrested, a Turkish national named by police as Riza Balkan, 49, remains in police custody in Trang province, where the gang were arrested after the car they were travelling in failed to stop at a police checkpoint.

Highway Police manning the checkpoint gave pursuit and forced the car to stop.

Officers searched the vehicle and found most of the stolen loot in luggage inside the car, Maj Gen Chonasit explained.

One Mexican woman, named by police as 57-year-old Mejia Zuluaga Maria Asseneth, managed to flee the scene, he said.

Police believe Ms Asseneth to be central to the robbery and she remains at large. She may be heading south to Thailand’s border with Malaysia.

A warrant for her arrest has been issued, said Maj Gen Chonasit.

Mr Balkan is apparently being held by Trang police on a drugs charge.

The driver of the vehicle the gang were fleeing in, an illegal taxi driver in Patong, has not named by police and has yet to be charged with any offenses.

Police are still questioning him, but at this stage believe he is innocent in terms of the robbery.

He failed to stop at the police checkpoint while under duress from the thieves, it was explained.

Thongsak Chintakarnroek said that about 450 jewelry pieces have been returned, but 173 pieces remain missing.

“The missing pieces would be worth about 5 million baht,” he confirmed.

Commander Chonasit added that the gang are also suspected of a similar jewelry theft in Bangkok on April 29 this year.

“They have denied the charges, but they will be charged according to the evidence we have against them,” he said.

“We are still questioning Mr Gonzalez and Ms Abu Bakar as to the whereabouts of the missing jewelry,” the police commander added.

Mr Thongsak praised the quick action by the police.

“I really appreciate what the police have done. We are so lucky to get the jewelry back,” he said.