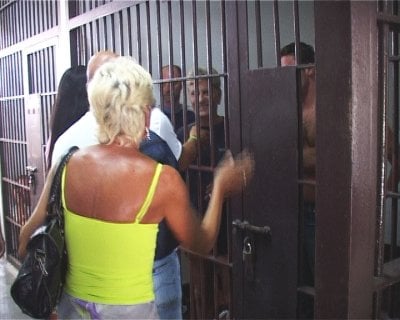 RANONG: A group of 12 foreign tourists arrested for overstaying their visas have spent their second night sleeping on the floor of a jail cell at Ranong Police Station.

Ranong Immigration Police, who have announced that they will deport the group, say they are only following “standard procedures” and will send the 12 to an Immigration detention center in Bangkok “soon”.

The group were arrested by a team of six Highway and Tourist Police officers at about 11 on Wednesday while on their way to Ranong and Burma for a “visa run” in the well-known “Big Bus”.

The bus was in Kapoe District, just 40 kilometers from the Ranong Immigration office, when it was stopped and the 12 were separated from the other passengers on board and placed in custody.

The most that any of the 12 had overstayed was six days.

Speaking from his prison cell, one of the detainees, a 31-year-old Australian man on his second trip to Thailand, told the Gazette:

“I can’t believe what has happened. The want to send us to the Bangkok Detention Center, from where they will deport us to our home countries – all because of a one-day overstay [in my case].

It was our second night sleeping on the dirty floor, with mosquitoes. I am black and brown from dirt.”

Some members of the group had contacted their embassies, he said, but been told, “Sorry. You are being deported – there is nothing we can do, it’s all part of ‘due process’.”

He said the group members had thought they would be released after paying 1,000-baht fines at Ranong Court yesterday. But they had been misled.

“The public prosecutor told us that if we just admitted to the Court what we did and paid a 1,000-baht fine, they would let us go to Immigration and we could complete our visa trip. We paid, but when we got to Immigration they fingerprinted us and said, ‘You’re being deported – immediately’.

Jutarat Payonchart, an employee of Phenpat Co Ltd, which runs the visa run service, told the Gazette from the Ranong courthouse yesterday afternoon that the police had overreacted in incarcerating the visa runners.

“Why did they have to keep them overnight in a cell? These aren’t illegal aliens trying to hide out in the country,” she said, adding that most had overstayed by just one or two days.

Speaking from his prison cell, the Australian told the Gazette, “We sent money for the tsunami problem. We like the Thai people and want to visit – and then we got s**t on.

“We are part of one of their tours, where everyone makes money. We spend money in Phuket, we want to stay here. It’s good for the economy, good for everyone. And now we are just being s**t on.

“We’ve been treated like animals, sleeping on the ground. I’ve never been locked up before in all my life. It’s absolutely disgusting. You cannot trust the Tourist Police anymore. They are supposed to be on our side, helping us. But now they have gone against us and made a big problem for us.

“This is absolute crap, of course. They must have another agenda. Only they know what it is; I can only speculate. This is completely wrong. I have spoken to other tourist police and they say, ‘This is unbelievable.’ There are a few bad apples involved and they have created major, major problems.

“I’ve lost flights, lost my money … it’s ridiculous,” he said, adding that he did not want to give his name “at this stage” as it might jeopardize any remaining chance of regaining his freedom and avoiding deportation.

Those chances appear slim, however.

Pol Capt Weerachai Phugkesorn of the Ranong Immigration Office told the Gazette that all 12 foreigners were arrested because they had overstayed their visas.

Among those facing deportation were English, Korean, German, Vietnamese, French, Italian and Swedish nationals, none of whom had overstayed by more than six days, he admitted.

He stressed that the arrest, confinement and deportation of the tourists did not reflect a change in Ranong Immigration’s long-standing and relaxed policy when it comes to overstays.

“It’s true that if people arrive at our office and have overstayed their visas we just fine them 200 baht per day of overstay. But it was [another police division] that arrested them, not us. If they hadn’t been arrested, we would have just fined them as usual.

“The case went to court, where the judge rendered a decision. They were sent to us by the police and we are just following the provisions of the Immigration Act by transferring them to Bangkok for deportation,” Capt Weerachai said.

Siripakorn Cheawsamoot, Assistant Director of TATs Region 4 Office in Phuket, said he believed the arrests would have no impact on tourism as long they were legal.

Foreign tourists would be more confident of their safety if they knew the police were carrying out their duties strictly according to the law, he added.