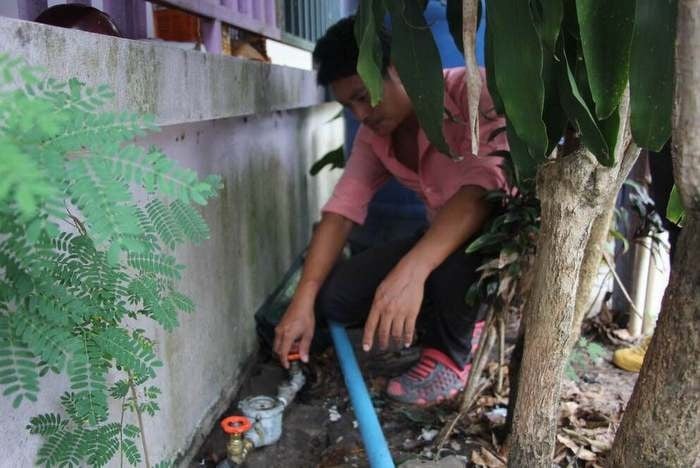 PHUKET: Leaky water pipes landed a Rassada resident with a more than 16,000-baht water bill to pay, prompting Phuket authorities to issue a home maintenance advisory to all island dwellers.

Pornsak Saengsri was stunned to receive a 16,829-baht water bill for the month of May after having become accustomed to paying a maximum of 200 baht to keep the water flowing in his rented home.

“The house belongs to my cousin, but I have been living here for years,” Mr Pornsak told the Phuket Gazette. “I knew there must be something wrong, as only my wife and I live in the house, so I contacted the Phuket Water Authority [PWA].”

PWA officials went to the house and found that though the water meter was accurate and in working order, a pipe was leaking, resulting in an inflated bill.

Mr Pornsak was then advised to turn off the water valve unless water was needed, at least until the leak was fixed.

“If the bill is higher than normal because of a leaking pipe, it is the responsibility of the homeowner to fix it. The only thing we can do for Mr Pornsak is to allow him to pay off the bill in installments,” PWA Manager Pisak Chonlayut told the Gazette.

Mr Pisak used the incident as an example for all homeowners and renters to pay close attention to their water meter and to the condition of their pipes.

“Every homeowner should regularly monitor their water meter. If it is measuring a higher usage than normal or if it is still moving when the water is not running, something is wrong,” he said.

“You must fix these problems as soon as possible to avoid being stuck with a very expensive water bill.”