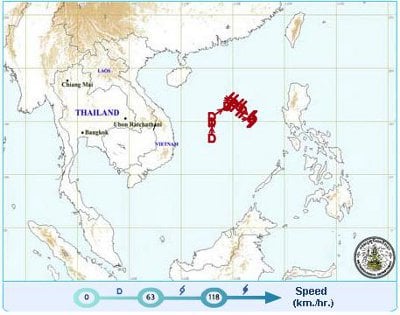 PHUKET: A “tropical cyclone” warning was issued by the Thai Meteorological Department this morning for “Gaemi” which is currently in the middle of the South China Sea, but expected to make landfall today.

“Strengthening, it will make landfall over central Vietnam by October 6 [today], then downgrade and move pass the lower Northeast, the East and the Central of Thailand. This will cause torrential rain with heavy to very heavy rain in many areas,” the report said.

The outfall from Cyclone Gaemi is expected to combine with the prevailing southwest monsoon over the Gulf of Thailand, the South and the Andaman Sea, including Phuket.

The tropical storm has moved further south than originally expected, which will result in heavier rain, especially in the upper Southern region, Royol Jindon, who is involved in flood and water management operations in Thailand, told The Nation yesterday.

Heavy rain is expected in at least 60 per cent of the storm’s path in the lower North, lower Central and upper Southern regions.

The volume of rain could hit 100 millimeters per hour in the upper South, Mr Royol said.

Strong wind waves two to three meters high are expected in the Andaman Sea and Gulf.

“People in the risk areas should beware of the severe weather… All ships should proceed with caution, and small boats keep ashore during October 7 to 9,” said the warning.