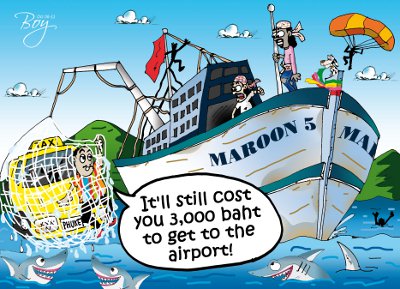 PHUKET: For all the bandying about of the term “sustainable tourism”, Phuket might just have had the victory it needed in the Go Eco Phuket reef cleanup staged last weekend. That single record-breaking feat has provided a model to follow in breaking the mold of inaction and setting island development off in the right direction.

The event had all the elements vital for a successful campaign. The organizers branded the concept under their own banner “Go Eco Phuket” and they secured not one, but two internationally recognized organizations that are expert in the relevant fields: the world-renowned PADI dive tour and instruction brand, and the globally respected Project AWARE marine conservation foundation.

Having international partners lead the way made it much easier to get local government and other major organizations on board, including the Royal Thai Navy, the Marine Department and the Governor’s Office. But more importantly, and without in any way diminishing the efforts of hundreds of volunteers making the feat possible, the organizers created a focal point that locals could support through action – not just words.

It is only through the participation of local people, agencies and businesses that true progress can be made. In fact, everyone can benefit to the detriment of no one.

Deserving of special mention are the owner, captain and crew of the Thai fishing boat Aroon Samuth 5, which, with assistance from the Royal Thai Navy, lifted off the seabed a discarded fishing net weighing 4.5 tons.

Pamuke Achariyachai, who heads the Kata Group of hotels and resorts, also deserves credit for publicly announcing an open invitation for more ideas to help contribute to preserving Phuket’s natural environment. Support would be forthcoming, he pledged.

Despite what cynics may think, many government officials and industry leaders have been right in repeatedly reminding us that Phuket’s natural beauty remains the single-most powerful attraction we have in drawing millions of tourists to our shores every year. As our former governor points out (see ‘First Person’ in this week’s Gazette), this natural beauty can easily be rendered subordinate if negative issues continue on the path to domination of visitors’ or potential visitors’ impressions of our island.

It is in tackling issues such as traffic congestion, public transport and water pollution that Go Eco Phuket has become a role model with its unified-community approach to problem solving. It is a strategy involving all people affected, and it worked in enabling officials last month to make significant inroads into the problems with illegal taxis. Within a couple of weeks, the officials were able to get hundreds of drivers to register their vehicles and to begin to accept the call for standard fares island-wide.

Now, with this unified approach and the news that government concessions for public bus services are up for grabs across the island, how can we all help to bring those vitally needed services to fruition?

Phuket Opinion: Of MICE and mangroves

Phuket Opinion: Being negative can positively save lives