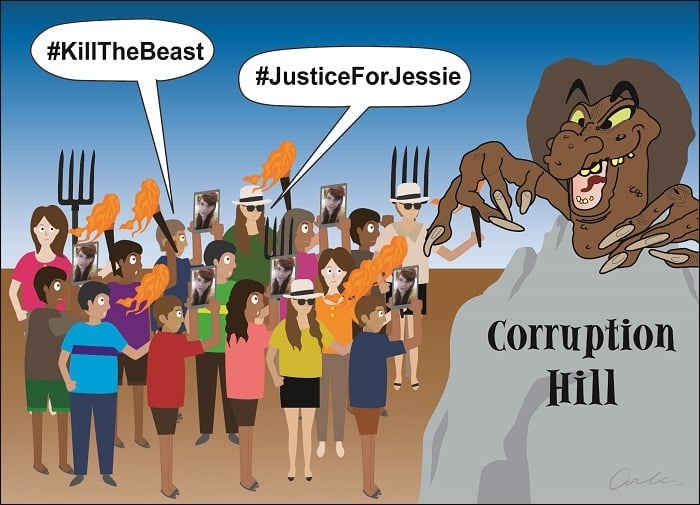 PHUKET: Reaction on social media to pleas for justice from Jessie Vard through a series of recent Facebook videos that went viral, should serve as an interesting case in observing the extent to which social media can impact the Thai criminal justice system.

It goes without saying that there are two sides to every story and that what is known about the Vard case thus far currently comprises only previous allegations made by Jessie’s father Colin.

The family’s saga, as initially revealed by British investigative journalist Andrew Drummond in 2011, reads much like the plot of a medieval fairy tale set here, in new millennium Thailand.

It will be interesting to follow the twists and turns of the case and see if the family gets the fairy-tale ending they seek: the return of their assets, as well as punishment of those responsible for allegedly defrauding them.

Plot devices include a wicked stepmother, who allegedly forced Jessie and her half-brother – her own son by birth – down into a dark, centipede-infested well, holding them captive there for several days before their discovery and release.

While police were eventually able to track down and arrest Jessie’s stepmother, who is now in prison, the uneducated former bar girl has been described by Mr Vard as “a pawn” in a larger mafia racket involving lawyers, police and state officials colluding to cheat or defraud wealthy foreign men married to Thai women.

Efforts thus far by Mr Vard to use the criminal justice system to win back his assets over the past five years backfired in the worst possible way, with officials openly warning him that his life, as well as those of his children, were at serious risk.

The family was forced to live on the run, changing locations frequently to stay a step ahead of would-be assassins, according to the allegations reported by Mr Drummond, who incidentally decided in January to leave Thailand after 25 years of investigative journalism, citing safety concerns for himself and his family.

Jessie’s videos have rekindled interest in the family’s plight, putting an endearing human face on the issue and resulting in the National Council for Peace and Order to call on Mr Vard to file a complaint through the Damrongtham Center so that an independent investigation could be launched.

The Vards seem to be in a position where they have little left to lose; drawing as much publicity to the case as possible may be the best strategy left to protect them, much like the approach used by former massage parlor tycoon turned graft buster Chuwit Kamolwisit just over a decade ago.

It will be interesting to see whether Jessie’s videos can help sustain sufficient public interest in the case to help force such an investigation and, if so, what the ultimate results of the probe might be.

Patong’s bowling puts them on top against ICC