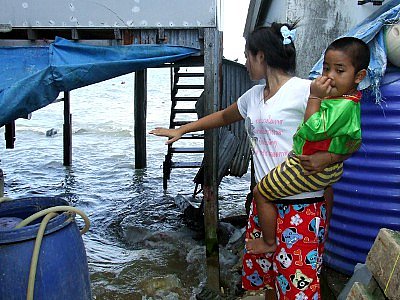 PHUKET: Large waves brought on by the wet-season monsoon are damaging homes at a small sea gypsy community on Phuket’s east coast, forcing villagers to seek refuge with family members or even sleep outdoors.

John Pramongkij, 57, is scared to sleep in his house, with the walls cracking from the incessant pounding of the waves.

“I don’t dare to stay in the house during high tide, so we all sleep outside near the community hall,” he said.

Pa Pramongkij, 35, no relation to Mr John, has moved her family of four to sleep in her mother’s small home.

“So now, we have to sleep in my mother’s house. If I lose my house, I’m not sure where I will live,” she said.

Wilaiwan “Namwan” Rakdee, a 21-year-old mother of a two-year-old boy, lives in a damaged house with five others.

Like the rest of the villagers, she is calling for Rassada Municipality to fix a sea wall to protect the village from the sea.

“We urgently need a strong new sea wall to protect our homes. This is the second time our houses have been seriously damaged by strong waves.

“The first time was around October last year. Rassada Municipality gave us sand, lime and rock to build temporary barriers, but they were no match against the waves,” she said.

Mrs Wilaiwan explained that the sea wall was built about five years ago.

“It took about three months to build, but it started breaking apart in its first year.

“If the wall had been built to a good standard, our houses wouldn’t be damaged. They just laid down big pieces of concrete, altogether about one kilometer long. They didn’t secure it properly by driving it down firmly,” she said.

“Many government officials have come to inspect the state of the collapsed wall, but they have done nothing about it,” Mrs Wilaiwan added.

Rassada Mayor Suratin Lianudom told the Gazette today, “To rebuild the wall would cost more than 10 million baht, which we don’t have.

“This year’s budget is already tied up in other projects. Therefore, we will request a budget [to build a new wall] from the provincial office in the next fiscal year [which starts on October 1].

“However, we’re not sure when we can [confirm this] because the new government has yet to settle in,” he added.