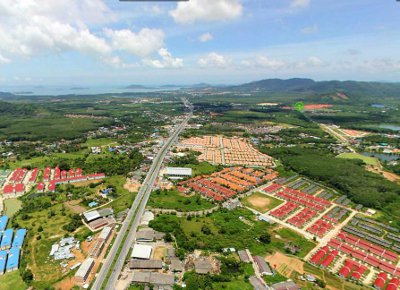 PHUKET: A majority of Phuket Gazette online readers feel that real estate prices in Phuket will fall over the next five years due to oversupply, according to the most recent online poll.

Overall, nearly two-thirds of those taking part (62.5%) thought that real estate prices would fall. Of these, most thought the fall would be large (32.7%), slightly more than those who predicted a moderate decrease (29.8%).

In contrast, just under a third of voters (29.4%) thought prices would rise. Of these, the majority (23.8%) predicted only a moderate rise, while just 5.6% thought the rise would be large.

The remainder of those taking part, 8.1%, predicted real estate prices would hold steady.

In a breakdown by demographic, those identifying themselves as Thais were the most pessimistic, with 71% thinking prices would fall. Of these, more people thought the fall would be large (40%) than moderate (32%).

The trend in voting among those identifying themselves as “foreign local residents” or “tourists or visitors” were almost identical, with more than 60% in each group predicting a fall in asset prices.

To opine on this topic leave a message in the Readers’ Forum below. The Phuket Gazette welcomes all comments that comply with our “house rules”.

To vote in the new poll about police enforcement of traffic law, click here.