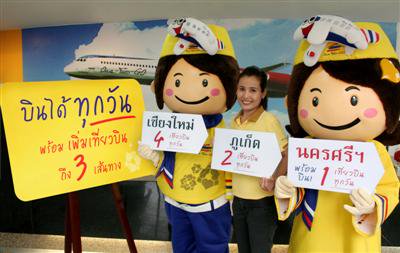 The new flight will depart Phuket at 1:40pm daily and make the return from Don Meuang at 3:30pm.

One-Two-Go already operates one flight between the two destinations, departing from Phuket at 11:50 am and making the return leg from Bangkok at 1:35pm.

One-Two-Go will also raise the number of daily flights between Don Meuang and Chiang Mai to four daily and reintroduce daily service from Bangkok to Nakhon Sri Thammarat.

Prices on the Nakhon Sri Thammarat route are initially being offered at a special promotional rate of just 1,250 baht, all inclusive.

The added flight represents a recovery for One-Two-Go in Phuket following the crash of flight OG269 on September 16, 2007 that claimed the lives of 90 people, including 45 foreign tourists.

The carrier was subsequently hit with a forced suspension of service in 2008 pending a safety review of its operations.

A Transport Ministry probe into the cause of the crash later found it was a combination of wind shear, pilot error and systemic failures at the airline and the Civil Aviation Authority.

The Indonesian pilot of the aircraft was among those who perished in the flight. There were 40 survivors.