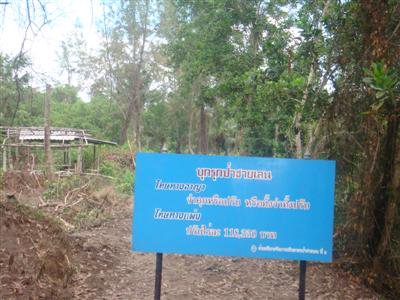 THEPKRASATTRI, PHUKET: After receiving a deluge of complaints, Minister of Natural Resources and Environment (MNRE) Suwit Khunkitti has ordered his department to put a stop to the continuing destruction of Phuket’s dwindling mangrove forest reserves.

On Wednesday morning, Mr Suwit sent high-ranking officials to a site at Thamaphrao Village in Tambon Thepkrasattri, where more than 50 rai of forest have allegedly been illegally cleared over the past year.

Department of Marine and Coastal Resources (DMCR) Director General Jatuporn Buruspat, together with MNRE Phuket office chief Ongard Thanacharnmongkhon and 20 officers, arrived at the site at 10:30am.

Thamaphrao Village chief Wichai Trithep was there to explain the situation to them.

“I can’t take those men destroying our mangrove forest anymore,” he said. “It’s been almost a year now.”

Authorities were already aware of the encroachment on October 2, when officers from Thalang District Office and Thalang Police surveyed the site, finding almost 9 rai destroyed, he said.

They have so far failed to make any arrests.

“Even after the police came to look at the site they started using heavy machinery to destroy more forest,” Mr Wichai said.

Whoever was responsible for the destruction should present land title deeds or other supporting documents to the DMCR, Mr Jatuporn said.

“Until that time we’ll have to restrict access to this site,” he said.

“As I’m responsible, I confirm that there will be no more mangrove forest destruction. The law is the law,” he said.