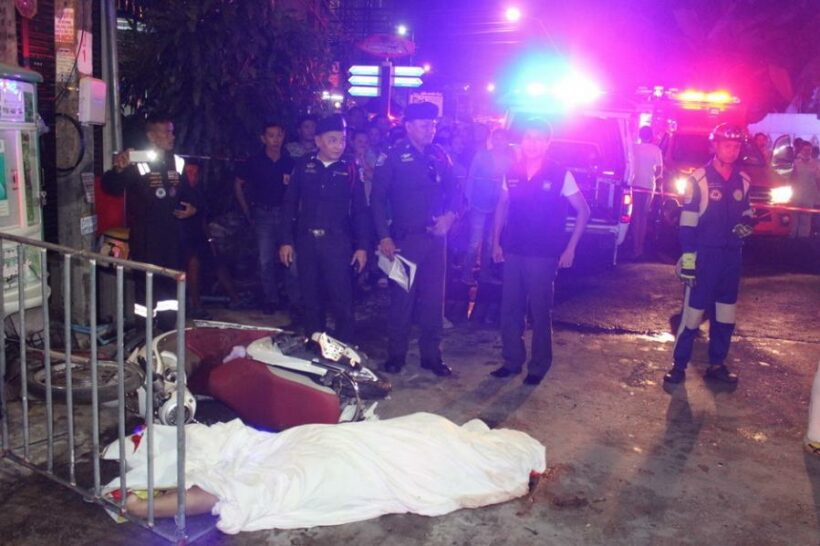 PHUKET: A motorbike driver died instantly last night when her head was crushed by a ‘broken down’ tour bus. The incident, which also sent more than 30 “shocked and moaning” Chinese passengers aboard the bus to hospital, occurred as the two vehicles descended Patong Hill westbound.

The fatality, Ms Rattana Sukpisal, 44, had a passenger with her on the bike. The passenger escaped with minor injuries.

Following the collision with the motorbike, the bus crashed into the concrete wall at the foot of the hill, a place where scores of buses have come to rest following gruesome accidents over the past several years.

“The tourists in the bus were taken to Patong Hospital where several were found injured. The bus is owned by Lojarus Travel Co Ltd and was being driven by Mr Wuttichai Srichan, 42,” says Lt Col Jongserm Preecha of the Patong Police.

“Bus driver Wuttichai told us that he had picked up the tourists from Phuket Town and that they were going to Soi Bangla in Patong. It was raining and the road down the hill was very slippery. Wuttichai said the bus lost control in the curve at the bottom there because the air brakes didn’t work,” the policeman added.

Police have informed Ms Rattana’s cousin of the death.

A pick-up truck driven by Ms Samai Yenchaturat, 50, was also damaged in the crash.

Police say the bus driver may or may not be charged with causing the accident, depending upon the results of ongoing investigations.

Man survives road crash by jumping out of moving truck