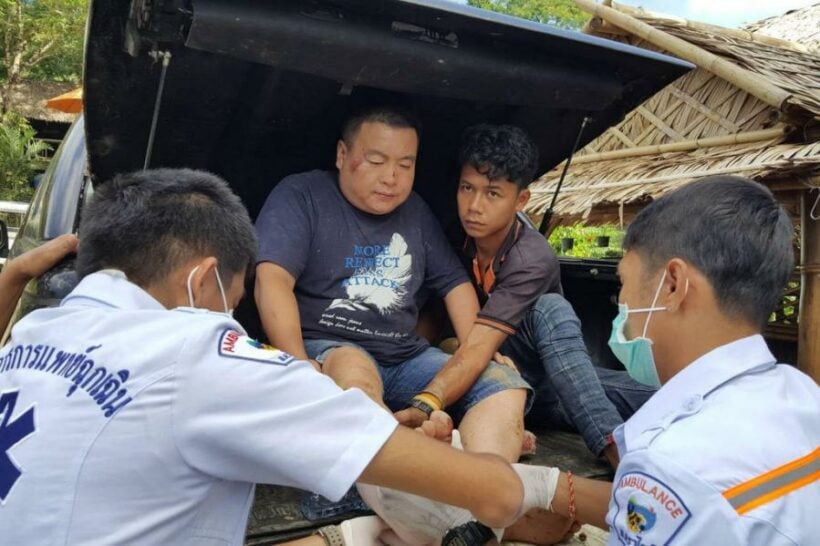 Vachira Hospital received a report of the incident at about 9:30am, then asked rescue workers to send three ambulances to the elephant camp in Chalong.

A total of five people were hurt, four tourists and the mahout leading the ride. The mahout, hurled off the back of the beast he was riding, suffered a back injury and was sent to Vachira Phuket Hospital. The four tourists, two females and two males, were sent to Phuket International Hospital.

Hu Jun, 39, injured his ankle and suffered chest pain. His 13-year-old daughter, Hu Yuxin, had a minor sprain. Tang Senlie 39, required surgery for an unspecified injury, and Tang Ye, 12, was released after x-rays and other tests for injuries.

According to the mahout, who asked not to be named, Mr Hu Jun and his family boarded two elephants, ‘Giant’ and ‘Numchoke’. About 200 meters down the track of their ride, a neighboring dog began to bark “wildly”, causing the elephants to panic and run out of control. It was raining and the ground was muddy.

“Both elephants fell, but fortunately the tourists were thrown free,” the mahout added.

Officers from the Phuket tourist police went to visit the victims at the hospital.

The owner of the elephant park says he will take full responsibility for all medical expenses incurred.