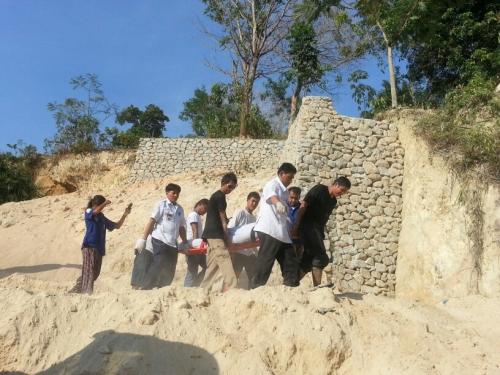 PHUKET: One man is dead and another injured after a landslide buried them while they were building a retaining wall high in the hills of Patong late yesterday afternoon.

The two men were working in a trench about two meters deep when the land beside them gave way, burying them alive, explained Lt Thawatchai Srimai of the Patong Police.

Rescue workers called to the scene worked frantically for two hours before they could free Mr Wid Inthong, whose head was nearly fully covered by the dirt.

“His face was all pale. Rescue workers put him on a respirator and a saline drip before rushing him to Patong Hospital,” Lt Thawatchai said.

But by the time the rescue team reached Phuket native Sanit Liponket, 49, he was dead, Lt Thawatchai added.

Pisit Sitthitaru, 40, the backhoe controller at the site, told police, “While we were working a large rock tumbled down and struck Wid and more dirt caved into the trench, almost covering Sanit’s head,”

“Me and other workers tried to help them, both but we could not help Wid,” he added

Lt Thawatchai said police were continuing their investigation into the incident.

Phuket full-scale tsunami drill not to be announced in Russian