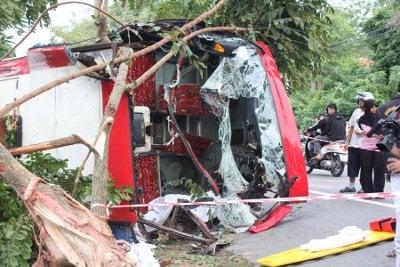 PHUKET: The driver of an empty tour bus died this afternoon after the bus he was driving overshot a curve near Ao Makham, on Phuket’s east coast, and slammed into a tree.

The driver was heading back to the operating company’s depot after dropping off Chinese tourists at the Laguna Phuket resort complex in Cherng Talay, said Maj Sakon Krainara of Phuket City Police.

“We received a report of the accident at 4:40pm… The driver was heading back to the garage of the Vision Transport company, which is located in a side street near the Kamlai Thong boxing stadium, about two kilometers from where the accident happened,” he told the Phuket Gazette.

“The driver was 45-year-old Kongklit Sriprom, from Udon Thani province. He was the only person on the bus. He died at the scene,” Maj Sakon added.

Usana Inmuang, a 36-year-old teacher at the Ao Makham Child Development Center, escaped injury after swerving to avoid the oncoming bus, forcing her Toyota Soluna sedan into a roadside ditch.

Police have yet to announce any theories as to why the accident occurred.