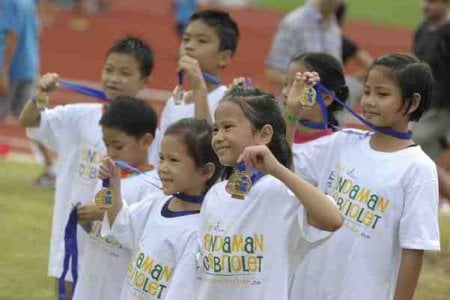 Last year’s event was a great success with over 220 participants ranging from 6 to 15-years-old competing in age-appropriate distances to become Ironkids.

The December 2012 event expects to see the number of participants grow to 300 children, with the age range extended to include 17-years-old.

The swim section of the race takes place in the 50-meter Olympic size swimming pool.

The bike course will be on a quiet, flat road, near the facility, which will be secured by Siam Guardian Services along with the Kusoldham Rescue Foundation, making it safe for participants.

The event will conclude with a run on a specially designed course set around the complex, with all athletes finishing on the club’s 500-meter running track.

Stations will be stocked with Gatorade and Singha Water to ensure athletes remain hydrated throughout the race.

All athletes crossing the finish line this year will receive an official TSLC IronKids Phuket t-shirt from Asics, with the top three from each age group receiving a trophy.

Swatch have kindly sponsored 36 Flik Flack and Swatch watches for all first place finishers – both in individual categories and also for the relay team participants.

With expertise and guidance from Image Asia, a junior press team from a selection of schools will be producing the 2nd edition of the “Iron Island” post race newsletter, which will be printed and circulated around the schools and online, with all content provided by children from participating schools.

The junior press team will be briefed at a special in-house experience day at the press offices of Image Asia, preparing them with ideas and tasks for race day.

The Phuket Gazette will run a competition following the Ironkids race, encouraging parents to send in their favorite photos of the day, from which Gazette editors will select the three best images that capture what it means to be an IronKid.

The official radio station supporting the event, 91.5FM (Phuket FM Radio), will be providing the event day playlist, which will be compiled with song requests from all the participating IronKids who can send in their requests during the month of November. Kids can request songs by text, email or on Facebook and hear them played on air.

Approximately 60 children from local Phuket schools will compete on the day, supported by local companies, who have sponsored teams of 10 children for race fees and the school training sessions for the local children at Thanyapura throughout November.

Many corporate sponsors, such as Lee Marine, Club Anantara and CBRE are regular supporters of this program and will be helping children from Anuban Phuket, Bangtao School and Thalang School compete in the event.

The Triathlon Academy at TSLC will design Triathlon training programs for the children to prepare them for the race.

A competitive field of accomplished young athletes will return to Phuket in December, with Zoe Bowden, two time TSLC IronKids Champion, confirmed to race in the senior female 12-13 age group. Zoe has competed in many events in Singapore and Malaysia and is excited to return to Phuket to defend the title of TSLC IronKids Phuket overall winner.

Chris Thomson, from British International School, Phuket, has won the Intermediate division several times, and will now be competing for the first time as a senior competitor, as he is now 12-years-old. His younger sister,Katie Thomson, 7, looks to be a strong competitor in the junior division.

Ironkids is proudly sponsored by the Phuket Gazette, PGTV and the nationally televised Phuket Today show on UBC/True Visions. Phuket Today, co-produced by PGTV and MCOT World, will be providing coverage of this event. The half-hour show runs six times a day, seven days a week, on channel 99.