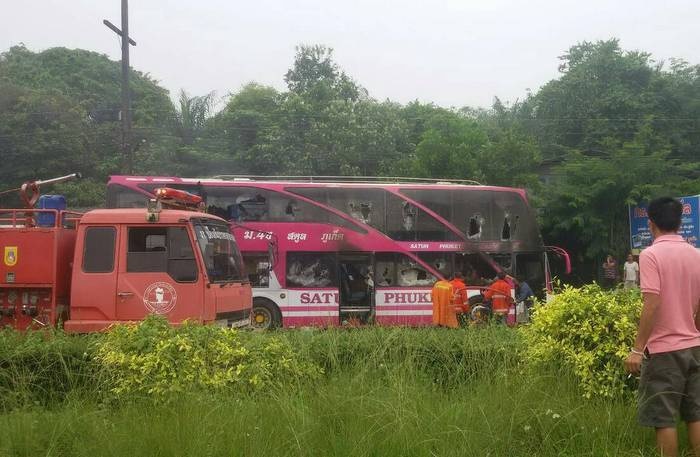 PHANG NGA: Locals were able to save the lives of all but one person trapped inside a flaming Phuket-Satun bus this morning.

A total of 21 passengers were on the bus, which was parked on the hard-shoulder of Petchkasem Road, in Phang Nga province, while the 54-year-old driver, Prathueng Sakkaew, used a borrowed welding torch to fix his seat.

“While he was welding, a spark set his seat on fire and flames quickly spread to the rear of the bus,” said Lt Sorasak Jandee of the Takua Thung Police. “Mr Prathueng panicked and fled through the driver’s door, leaving his passengers trapped.”

Nearby locals responded to Mr Prathueng’s calls for help, and broke the windows of the bus, allowing the passengers to escape the smoke filled vehicle.

Daeng Thaharat, 76, was pronounced dead at the scene, while 12 other passengers were taken to Phang Nga Hospital for treatment. Of the 12 injured, two men and two women remain in serious condition due to smoke inhalation.